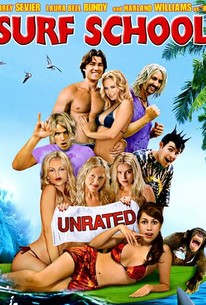 The familiar Cinderella concept gets a sun-splashed makeover in Death to the Supermodels director Joel Silverman's wave-riding teen comedy. The misfits of Laguna Beach high school have suffered more abuse than they're willing to take at the hands of in-crowd bully Tyler Masters (Ryan Carnes), and as the senior trip draws ever closer their hunger to seek revenge for years of humiliation grows too powerful to resist. Enter newly arrived high school student Jordan (Corey Sevier), a former east-coaster who seems to be having a hard time fitting in at Laguna Beach. When Jordan learns that the highlight of the senior year is the annual surfing contest in Costa Rica, he soon hatches a plan that will give the downtrodden outcasts a much-needed ego boost while simultaneously serving Tyler with a well-deserved comeuppance. In order to do it right, though, Jordan will have to convince outcast hip-hopper Mo (Sisqo), morose Doris (Laura Bell Bundy), skate-punk Taz (Miko Hughes), and virginal Larry (Lee Norris) to break for Costa Rica a week early and train for the competition under the tutelage of loopy former surf pro Rip (Harland Williams). It's not going to be easy, but if Jordan can pull the troops together and make this wild plan work, he just might manage to leave his mark on Laguna Beach High after all.

Rachel Jennings
as Girl in Customs

Brent Aikin
as Father in Customs

Hilary Momberger
as Mother in Customs

There are no critic reviews yet for Surf School. Keep checking Rotten Tomatoes for updates!

...What can I say about Surf School? In the history of teen/twenty-something comedies, there may never before have been a movie as cliché as Surf School. Following the genre formula to a tee, there are a ton of cheesy jokes, ridiculous situations, and good looking people wearing very very little. Three guys, Three girls, a quirky old couple, a veteran comedy actor making a cameo, it has it all, and it's absolutely as cheesy as it gets. The movie isn't funny, the story isn't good, and the acting is very bland. It was pretty much everything I expected when I added it to my queue. Sometimes you add these comedies and you find a gem, like National Lampoon's Barely Legal. Other times you get a "Surf School." It really is just a waste of time.

no plot, no story, no laugh, just way too different to film like American Pie or the others... At this rate, this is the worse!