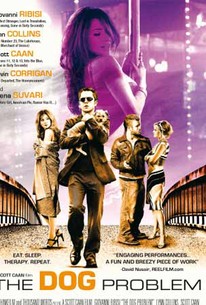 A once-successful novelist in search of creative inspiration and personal happiness purchases a puppy in hopes that the resulting companionship will open up a new path of self-discovery in a contemporary comedy of urban dissatisfaction directed by Scott Caan. There was a time when Solo (Giovanni Ribisi) had it all: success, fame, wealth. But now times have changed, and after squandering his savings on drugs, women, and therapy, Solo finds himself at a personal and professional crossroads. On his last visit to his high-priced psychiatrist Dr. Nourmand (Don Cheadle), the concerned doctor suggests that Solo get a pet to relieve his loneliness. Though Solo has never been particularly find of animals, he soon relents and purchases a pint-sized pooch. Not long after, Solo makes the acquaintance of spunky stripper Lola (Lynn Collins), who just so happens to be caring for a formidable dog that takes a healthy chunk out of Solo's decidedly timid lap-dog. Though the friendship between Solo and Lola soon promises to blossom into something much deeper, it seems as if a canine complication may be keeping the pair from realizing their relationship to the fullest.

Brian Goodman
as Joe the Guard

Crispian Belfrage
as Jeffrey the Butler

Med Abrous
as Brad
View All

News & Interviews for The Dog Problem

Toronto Wrapup: Senh, Jen And Tim’s Raves And Rants From The Festival

View All The Dog Problem News

Critic Reviews for The Dog Problem

A lackluster comedy that has very little bark and no bite.

Scott Caan's second directorial effort is an intimate, comical gem of a film...

aided immeasurably by enjoying the little touches and all but ignoring the big picture.

Could have done with a strong voice to step in and demand repairs to shortfalls that are reminiscent of what often plagues films that are too much of a one-person creation.

There is [a Woody] Allen-ish quality to this talky comedy. But Ribisi is very appealing, Lynn Collins is a distinctive love interest and the talk is funny and quick.

A romantic comedy which doesn't force its charm down your throat and instead allows the viewer in to peek around its quirks and discover the true heart beating within.

Audience Reviews for The Dog Problem

The Dog Problem is a good little comedy that is quite original, and in many ways pretty crazy. I really enjoyed the film, thought that the film was entertaining, well directed and it had a good cast. But this is the type of film that there could have been a slightly better script before green lighting this film. The film for what it is a good, crazy comedy, but at times the film is uneven. I enjoyed very much the idea of the story for this film, and I just enjoyed that things go wrong for the main character brilliantly played by Giovanni Ribisi. This is a well crafted comedy film that is very original. The Dog Problem is simply put, a fun, entertaining and smart romantic comedy that is quite different from other rom-coms of the past. I very much enjoyed its originality of the story if you're looking for a comedy that's quite different, and then The Dog Problem is that film. Not perfect, but this film has enough good things going for it to make it an entertaining viewing experience. The cast do a great job, and it only adds to the films strength. The Dog Problem is a well crafted comedy that is very different, but still retains enough of the usual material we'd expect from a romantic comedy. But this film still has enough originality to make it a worthy film to watch. The Dog Problem is a good film that I very much enjoyed and thought that the plot and acting were great. This is a must see for an audience wanting something slightly different in their rom-coms.

Funny, I guess. It was a pretty slow movie and not incredibly well directed, but it had heart and a good ending. Good to see Ribisi in a leading role, and I always love Caan and Cheadle.

Giovanni Ribisi finally gets another lead role. he is phenominal!!!

Weak. Has it's moments, and is not exactly a bad movie, but it just doesn't go anywhere much and you don't really wind up caring for any of the characters apart from the dog. Mena Suvari is the highlight in this one, and the only one who really stands out, but even her character is not all that interesting or evolved.