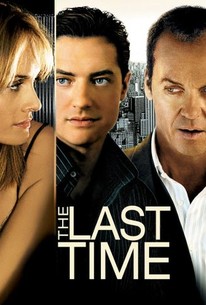 A cynical New York salesman (Michael Keaton) finds his scornful ways unexpectedly softened upon falling for the fiancée of his new business partner (Brendan Fraser), a Midwest transplant attempting to find his footing in the city, in screenwriter-turned-director Michael Caleo's feature directorial debut. The Bindview Company is a firm comfortably nestled in a corporate park that specializes in a highly profitable product. Ted (Keaton) is a former Northwestern University literature professor who has since found his calling in sales. When fresh-faced Ohio native Jamie (Fraser) arrives at Bindview eager to acclimate to life in the big city, cynical Ted greets the cub salesman with a palpable sense of scorn. Though Jamie is currently engaged to be married to the pretty Belisa (Amber Valletta), the bride-to-be is beginning to view her prospective spouse as something of a loser, and soon sets her sights on his reluctant mentor Ted.

Douglas M. Griffin
as Man No. 2

John McConnell
as Barney
View All

News & Interviews for The Last Time

View All The Last Time News

Critic Reviews for The Last Time

[Writer-director] Caleo isn't able to sell The Last Time -- not the affair and especially not the ludicrous twist ending.

Feels like a script that was written backwards, as if the twist ending occurred to [writer-director] Caleo first and he then filled out a story to get to it. Fair enough, except getting there in this case is just no fun.

Strives for contemporary noir in tone but feels closer to an ineffective parody of James M. Cain filtered through faux David Mamet dialogue.

While his cast is first-rate, director-writer Michael Caleo doesn't know quite what his movie is about.

For all the good work that went into it, the movie is as phony as a game of three-card monte.

Love LaBute? Mad for Mamet? Well, let me introduce you to Michael Caleo.

Finding the all-important Achilles heel is the central focus of The Last Time, a routine office drama with a love triangle that unexpectedly turns into a biting character study.

Wildly entertaining ... Skillfully walks a fine line between black comedy and intense drama ... It's one of the year's best.

A clever and twisty calling card for filmmaker Michael Caleo.

Audience Reviews for The Last Time

Tries to be clever at the end but it only serves to make it look more stupid.

This was a good movie, I really didn't see the twist coming at all. The cast were all great and it was nice to see Brendon Fraser out of his lame action rut.

This was a good adult situations movie. Showing severe consequences when dealing with relationships and crossing lines. The ending was surprising but ended very weakly...See this for the experience...