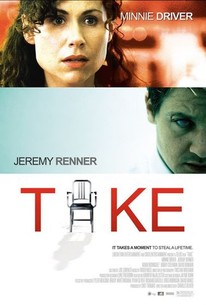 Critics Consensus: A story of redemption held together with flashbacks, Take has moments of emotional intensity, but is ultimately undone by preachiness.

Critics Consensus: A story of redemption held together with flashbacks, Take has moments of emotional intensity, but is ultimately undone by preachiness.

Critic Consensus: A story of redemption held together with flashbacks, Take has moments of emotional intensity, but is ultimately undone by preachiness.

Ana (Minnie Driver) was a wife and mother caring for an educationally challenged son and a moody-but-loving husband when fate led her to cross paths with Saul (Jeremy Renner). Saul was a gambling addict deep in debt to loan sharks and desperately in need of enough money to keep collectors from killing or injuring him; a foolish decision on his part led to tragic events directly impacting Ana. Years later, Saul is on death row, awaiting execution for his crimes, and Ana is unable to find closure. When Ana and Saul finally meet face to face not long before he's to be put to death, they both find it difficult to express their thoughts about loss, forgiveness, and redemption. The first feature film from writer and director Charles Oliver, Take was screened as part of the 2007 Tribeca Film Festival. ~ Mark Deming, Rovi

Critics Consensus: The Dark Knight Is One Of The Year’s Best-Reviewed

A dreadfully misguided movie whose story of redemption is utterly irredeemable.

The talky redemption element, however, ultimately feels artificially tacked on.

Stylistically as well as thematically complex.

Oliver's film manages to grapple with some knotty questions about justice, even if it is not nearly as bold or ironic as Lee Chang-dong's "Secret Sunshine"

Take is too enamored of its time-shifting gimmick and cheap suspense to ultimately have much impact.

This melodrama about capital punishment has no shades of gray, only beige.

Easily one of the hidden jewels of the 2008 Indianapolis International Film Festival.

This sullen dramatic thriller is introspective to the point of being navel-gazing. And its up-to-interpretation form of 'conclusion' is fairly pretentious.

It's close but no cigar for first time writer/director Charles Oliver as he bashes his unfortunate audience with a preachy and one-dimensional exposition of revenge wearing restoration clothing.

Clean but adult-themed movie that takes an intense look at extreme forgiveness and restorative justice.

This is a slow burn of a film. You'll have to commit to seeing it, but the rewards for doing so are great.

This is an uneven directorial debut -- but not an unaccomplished one. Oliver is a name to look out for -- it would be great to see what would happen if he worked with someone else's script.

Winds up being nothing more than a totally bizarre propaganda campaign for Restorative Justice. I can handle that, but what lost me is the fact that at absolutely no point from beginning to end was I interested in the events, or in the characters.

3 3/4's--This is a very slow movie, but for some reason I kept with it. I am glad that I did. I found it thought provoking, tragic, and moving. The tragic events of this movie will stick with me for some time, I imagine. I DO NOT, however, understand how they just wrote the dad out. I am assuming that somehow the marriage ended, and she was single by the end...

In the present day, Saul(Jeremy Renner) is being prepared to be executed by lethal injection. In the past, he is a petty crook and gambler who works at a storage facility while taking care of his invalid father. He is also badly in need of $2,000. Ana(Minnier Driver), a maid, could also use a little extra cash. She has just been told that her son Jesse(Bobby Coleman) is being transferred to special education. To avoid that fate, she wants to send him to private school but receives little support from her husband Marty(David Denman, of "Drop Dead Diva"), himself a teacher. "Take" is a ponderous movie that lumbers towards its inescapable conclusion where two people have their lives changed in a fateful meeting. After which, there is a curious endnote praising restorative justice which long story short says that confrontation is good for the soul between convict and victim, forgetting for a second how many people are in jail for victimless crimes. And in this case, it only works one way as Saul is definitely beyond the point of no return. In fact, Jeremy Renner's sad sack performance seems to work towards the conclusion that Saul has no business being on death row(which personally I don't think anybody should be) which is a debate the movie ducks away from.