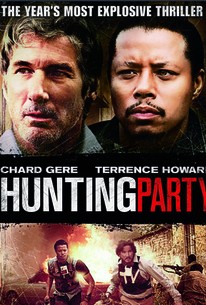 Critics Consensus: The Hunting Party is tonally awkward: its shifts from dark satire to serious political thriller create an uneven film, despite best efforts from its game leads.

Critics Consensus: The Hunting Party is tonally awkward: its shifts from dark satire to serious political thriller create an uneven film, despite best efforts from its game leads.

Critic Consensus: The Hunting Party is tonally awkward: its shifts from dark satire to serious political thriller create an uneven film, despite best efforts from its game leads.

An emerging journalist (Jesse Eisenberg), an experienced cameraman (Terrence Howard), and a discredited reporter (Richard Gere) find their bold plan to capture Bosnia's top war criminal quickly spiraling out of control when a UN representative mistakes them for a CIA hit squad in a light-hearted thriller inspired by Scott Anderson's popular Esquire article. The Weinstein Company provides stateside distribution for a film written and directed by Richard Shepard (The Matador).

Ljubomir Kerekes
as The Fox

Lucio Slama
as Man With Scar

News & Interviews for The Hunting Party

View All The Hunting Party News

Critic Reviews for The Hunting Party

While at times it may be glib, the film largely sticks to a grim tone of what a war as bitter as that can do to a country.

Ludicrous, bewildering, and largely true (at least the "most ridiculous parts" according to the film's preface), it plays like an adventure story written by Kafka

The action plot is lousy with cliched suspense scenes of back-road executions halted at the last possible instant.

By the time the end credits roll, you're still not sure what kind of movie The Hunting Party is supposed to be, other than just queasy.

Hopefully, The Hunting Party will find the success it needs to keep Shepard making off-center movies because Hollywood doesn't always reward hard-to-categorize films like this one.

...The Hunting Party still is a movie worth chasing down.

A very entertaining movie with some brilliant moments, especially in its delirious final stretch. [Full review in Spanish]

It's not a bad story as far as it goes, and says a lot about the strange culture war journalism ... [but] no story, no matter how interesting, can't do without a little bit of the Hollywood treatment, and "The Hunting Party" suffers that in spades.

Adorns its bankrupt inanity in the robes of Importance

There are a lot of movies that don't deliver on their promise. The Hunting Party is one of them. It's a disheartening disappointment.

Audience Reviews for The Hunting Party

The actors seem to be having a lot of fun and the dialogue is mostly very funny, but it is really hard to buy into most of this ludicrous "based in real events" plot that has a major revenge cliché as motivation for the main character and is a tonal mess in its stupid third act.

This film about journalists on the hunt for a Serbian war criminal suffers from being a bit undecided what exactly it wants to be. Sometimes it's a really dark commentary on the meaningless and brutality of war, the necessity to report about it as it is and then it tries to be some kind of satire, which just does not fit together that well. Whenever it concentrates on the ruined Bosnian houses, cities, and the lonely hills and forests, with the protagonists traveling through that hostile environment it has some really good moments. The humor seems out of place then, and the final info texts before the end credits try to make it look like a much quirkier film than it was or should have been, for that matter. Technically and as far as the acting is concerned, there is no reason to complain.For a film that is trying to portray reality the solution to the story comes a bit too easily and realistically. Entertaining but not entirely satisfying.

This is a very well done, really exciting movie. I am starting to search out anything with Richard Gere in it, anymore. He doesn't do a ton of movies, but what he does do always proves to be of really good quality

Richard Gere, Terrence Howard, Jesse Eisenberg, Diane Kruger, Mark Ivanir DIRECTED BY: Richard Shepard A young journalist, a seasoned cameraman and a discredited war correspondent embark on an unauthorized mission to find the no. 1 war criminal in Bosnia; they find themselves in serious jeopardy when they are mistaken as a CIA hit squad and their target decides to come after them. I thought this was a really good movie. It held my attention all the way through. Entertaining with action, comedy, and some drama mixed in. Really well done. Also the fact that it's based on three journalist and most of it is on true events makes it even better. There are some very intense scenes. The things that happend in that country is both sad and sickening. The acting was good by all three leads. Their characters are very likable as well. A really good movie that should be seen.