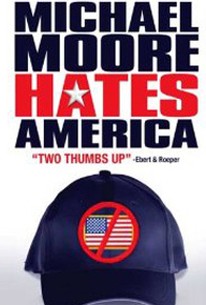 From Michael Moore's hometown of Flint, MI, to the movie-making capital of the United States, director Mike Wilson's inflammatory documentary travels across the country to hold the controversial Sicko director's allegedly questionable tactics up to the light for closer examination. Wilson is a filmmaker who wants viewers to question what they see and hear in the media, and he's willing to travel thousands of miles in order to highlight why you too should remain skeptical about Moore's motivations as a filmmaker. The result is a meditation on the American dream, and the manner in which diligence and determination can eventually pay off for the folks who aren't willing to let their dreams fade. Additionally, by speaking with such well-known media figures as Penn Jilette and John Stossel as well as a host of highly respected scholars, Wilson highlights how Moore manipulates interviews and statistics to serve his own personal agenda.

It's kind of a sweet movie in it's own way it's not really angry about anything.

Now despite that mean-spirited and unfair title, this is an honest attempt by one young filmmaker to examine Moore's controversial methods and to question his politics.

Wilson makes it clear that he doesn't share Moore's political beliefs, but the film isn't about ideology as much as accountability. The theme is: How does he get away with it?

Don't let the title fool you. Instead of a hit piece on Michael Moore's politics, Wilson examines his techniques, particularly the dishonest approaches he uses in filmmaking.

Wilson is just a softhearted guy mistaking boldfaced imitation for bravery and 'truth'...Good heavens, the hypocrisy is deafening.

I thought this would be right winged angry bullcrap that I would be turing off after 10 minutes, but it turned out to be pretty thoughtful. The film maker is pretty amatuer, but he does a decent job. I think MM is kinda a douche for not showing his face to defend his tactics. What is he so afraid of? That the guy might be right? Hmm....