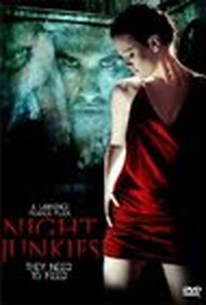 A desperate London couple attempts to come to terms with their insatiable addiction to human blood in writer/director Lawrence Pierce's action-packed hybrid addiction/vampire story. Ruby (Katia Winter) is an exotic dancer with a dark past, and her shady East-end outfit is determined to promote her to the rank of call girl. Vincent (Giles Anderson) is the bloodthirsty vampire who was seduced into the world of the undead by a back-alley siren. While at first Vincent struggles to resist his craving for blood, the overwhelming power of his addiction soon takes grip -- forcing him into the streets in search of sustenance. When Ruby and Vincent first met in a crowded London café, it seemed to be love at first sight, but then Vincent's craving kicked in. Now, despite having escaped Vincent, Ruby has begun to experience the first signs of transformation as well. Realizing that the only way to understand what is happening to her, Ruby reluctantly seeks out Vincent and together the pair attempts to break their addiction to human blood. The situation is soon complicated, however, when Ruby's former "owners" decide that they want their star attraction back and send a sadistic killer named Matt to retrieve her by any means necessary. ~ Jason Buchanan, Rovi

There's not much new here, but there is at least one good sex scene.

Sexy, bloody, and disturbing, this decidedly unglamorous view of vampirism is a refreshing spin on a classic idea.

There are no featured audience reviews yet. Click the link below to see what others say about Night Junkies!