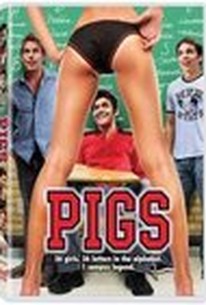 A college Casanova attempts to seduce a girl for every letter of the alphabet before graduation day in this raunchy teen comedy that attempts to answer the age-old question -- are men really swine? When it comes to the subject of ladies, Miles is a straight-A student. Handsome, suave, and never lacking for an effective come-on line, this ultra-smooth ladies' man returns to his dorm from yet another conquest only to be faced with a formidable challenge. Should Miles "complete" the alphabet before he sets out for the real world, he'll walk away from college with a tidy sum to get started in the real world; should he fail...well, at least he had fun trying. The only rule is that the less common the first letter of the girl's last name, the greater the odds become. While at first Miles seems to be blowing through the alphabet with the enthusiasm of a kid who just learned his ABC's, trouble arises when he gets to "X" and meets the girl of his dreams. Gabrielle Xeropolis is everything that Miles has ever wanted in a woman, and should she catch wind of his testosterone-fueled bet, chances are she will never speak to him again. With the clock ticking and graduation drawing near, the man who took the challenge to bed as many babes as possible in the least amount of time will now be forced to weigh his commitment to a morally questionable conquest bet against the knowledge that he could be passing up the love of a lifetime. ~ Jason Buchanan, Rovi

It's too nice to be gross and too gross to be nice.