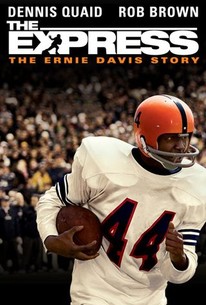 Critics Consensus: The Express crosses the goal line as an inspirational sports drama, although fans of the genre will recognize many -- if not most -- of its clichés.

Critics Consensus: The Express crosses the goal line as an inspirational sports drama, although fans of the genre will recognize many -- if not most -- of its clichés.

Critic Consensus: The Express crosses the goal line as an inspirational sports drama, although fans of the genre will recognize many -- if not most -- of its clichés.

Finding Forrester star Rob Brown steps into the cleats of Heisman Trophy-winning gridiron giant Ernie Davis in director Gary Fleder's inspirational sports docudrama. As a young boy reared not far from the northern Pennsylvania state line, Davis dreamed of blasting through the end zone and scoring a triumphant touchdown while fans rose to their feet and cheered. When Davis later became a star running back for the Syracuse Orangemen, his dreams were finally on the way to becoming a reality. Under the wing of coach Ben Schwartzwalder (Dennis Quaid), it seemed as if there is nothing that could stop Davis from entering into the annals of sports history; even during an era in which the civil rights movement was just gaining momentum, this fledgling gridiron giant never once doubted his ability to rise to the top. When Davis was diagnosed with leukemia shortly after being drafted into the NFL, however, his will to survive soon eclipsed his dreams of success. ~ Jason Buchanan, Rovi

News & Interviews for The Express

View All The Express News

Critic Reviews for The Express

While never as trailblazing as its subject, The Express is a worthy addition to the lengthy canon of sports biopics.

The sports-movie template is capable of absorbing any story and delivering the same uplift.

Full of stirring speeches and manly chins quivering with emotion, every frame is a cliché.

Gary Fleder's sporting drama has its heart in the right place but, sheesh, that title grows more ironic with each crawling minute.

Steams ahead with express-train determination, scooping on to its cow-catcher any cinemagoer hoping he can outrun yet another true-life drama about black sportsmen overcoming bygone bigotry.

Administers a strong dose of well-earned outrage at what men of colour had to go through to get to places their white counterparts reached with ease.

It makes the most of its on-the-field drama, but it tends toward gross generalizations and oversentimentality. ... As a result, the film is burdened with hokiness.

The movie also has its heart in the right place and it is as earnest as it can be. It simply falls short of being a great movie.

At times The Express couldn't decide whether it was telling a story of racial tensions, a general inspirational sports film or the tragic biography of Ernie Davis

Audience Reviews for The Express

A surprisingly enjoyable movie, and one that - I think - got lost among a great many football movies, primarily Remember the Titans, Any Given Sunday (in which Dennis Quaid also plays a coach...) and Friday Night Lights. These three aren't the comparables, though; if anything, put this one beside Rudy. It's an underdog story that's a bit formulaic but very well set in its moment, and it tells of a very human experience: though it's about racism - Davis being the first black player to win the Heisman trophy - it's not too heavy-handed, and it's just as much about football, and built on a deep love and understanding of the game. I recommend seeing it once.

Another well made true factual sporting film about an all star black American football star in the 50's/60's when racism was a very hot cookie in the States. The whole story, even though its true, isn't very original hehe they do tend to be all the same really, A poor boy having a hard time growing up as an outcast makes it good in the world of pro football due to his natural athletic abilities, wins over many peoples hearts and support but dies young from natural causes, missing his chance to really make his mark in the world. I have seen many good sporting films and they are always in the same vein, true or not, but they do seem to turn out well made and always make you feel good at the end or make you think, which is good. This film is no exception, its very very well made, looks really authentic capturing the era and problems of the time, has a great timeless soundtrack, little nuggets of real footage from the actual games and tugs at your heart strings throughout. It is predictable like all sport flicks but the fact its based on true events does make you ignore that, well you have to ignore that. The cast are all excellent, Quaid is good as the tough supportive coach and Brown is very good as Davis showing real love in his role, Dutton as Davis father is also very good in his short role adding real class to the whole film. I have to admit Americans sure know how to make a good sporting flick about their beloved national games, although Baseball doesn't fare as well as Football.

Although 'The Express' doesn't live up to the standards of movies such as 'Remember the Titans' but it manages to keep viewers excited and thrilled. Its talented cast manages to pull of the inspirational characters.

The Ernie Davis story; it's told from his child hood back in 1949 up until his death in 1964. For those who are sports fans, this movie is an instant classic in which I would put second only too "Remember The Titans", as we get an inside look at the child hood, life, and career of a true sports legend and those who surrounded him during his journey. It was amazinly done. For those who are not sportsmans - the movie has a solid plot with personal and life struggles,, it has an alright soundtrack (but ive seen better). Everyone knows that a great film needs a great soundtrack as it what truly brings some of the more emotional scenes alive; the movie however does lack that. It has top notch actors in Dennis Quaid and Rob Brown, and really just barley missed a beat. My only complaint is there is certain parts of the film that seem repeated, as if we seen this earlier in the film, but it happens rarley. In Conclusion I would say it's lack of soundtrack taking away from some of the better scenes that could be nothing short of amazing; and a storyline that sometimes seems repetive at points - it stands out as better than "Friday Night Lights", but not as quite up to par with Disneys "Remember The Titans".