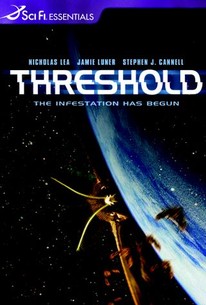 Evidently inspired by the 1958 theatrical feature It! The Terror From Beyond Space (which, of course, was also the basis for the 1979 thriller Alien), this made-for-cable melodrama begins as the crew of the space shuttle Oklahoma returns to earth after a routine mission. Unbeknownst to them, they have also brought back an alien "guest" in the form of seeds which blossom into insectoid life-forms, infiltrating human bodies to complete their evolution. At first, the victims of these aliens think they've merely broken out in blisters, but they soon learn differently -- to their unutterable horror. Racing against the clock, the Oklahoma's chief medical officer "Geronimo" Horne (Nicholas Lea) works in concert with his colleague Thaddeus Owens (Anthony Sherwood) and entimologist Savannah Bailey (Jamie Luner) to stem the alien invasion before the rapidly proliferating creatures reach the "threshold" amount -- at which point they will be impossible to control. Threshold debuted April 19, 2003, on the Sci-Fi Channel.

Philip Williams
as Off. Lehman

There are no critic reviews yet for Threshold. Keep checking Rotten Tomatoes for updates!

There are no featured audience reviews yet. Click the link below to see what others say about Threshold!