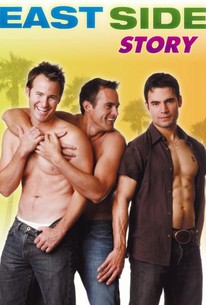 Writer/director Carlos Portugal's comedy drama East Side Story earns a historical footnote, as one of the premier mainstream (though non-Hollywood) American films about an openly gay Latino character. René Alvarado stars as Diego, an East L.A.-residing Chicano homosexual. As the story opens, Diego rides out a long, headfirst downhill slope. With his once-promising culinary career in tatters, and the local neighborhood invaded by increasing numbers of WASPS, he finds his one and only solace in playing kinky illegal immigrant-themed sex games with his male lover, Pablo (David Beron) -- which often proves difficult given the fact that Diego lives with his grandmother. Pablo's sudden indication that he recently had straight sex with Diego's nymphomaniacal aunt (Gladise Jimenez) threatens to damage or even destroy their relationship -- but this becomes irrelevant when Diego meets and falls in love with someone new: Wesley (Steve Callahan), a Caucasian man who moves in next door and promptly returns Diego's feelings. Suddenly, the future begins to look very bright indeed for these two, but serious questions linger about their ability to ride out the pressures wrought by an interracial gay relationship, including malevolent ex-boyfriends and the discouragement perpetuated by disapproving family members.

Anthony Fitzgerald
as Jimmy
View All

Critic Reviews for East Side Story

A delightful romp for those who found Quinceanera insufficiently queer, East Side touches all the bases...

Audience Reviews for East Side Story

This has to be the best reinterpretation of the classic Romeo & Juliet (with a different ending though) I love the play on West Side Story and transformed it into a gay Latino version, it's really well done. The acting was so superb from all the cast memebers, it also has excellent camera works and script. Don't forget the sountrack, simply amazing. The characters all had interesting development over the course of the film. It's a film that focuses on the Latino culture and the family unit. Each one of the characters learnt something from the experience of love, pain, conflict and salvation. Not a master piece but really well done.