Curse of the Faceless Man1958 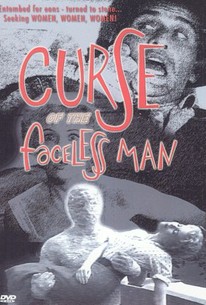 Curse of the Faceless Man Photos

While combing the ruins of Pompeii, a group of scientists uncover evidence that the long-ago eruption of Vesuvius was brought about by an Etruscan curse, pronounced by a gladiator who was denied marriage to the daughter of a senator. Turned to stone by exposure to embalming fluid, the gladiator is placed in suspended animation for 2000 years. Revived in the 20th century, the gladiator-now a faceless, granite-like creature-intends to claim the sweetheart (Elaine Edwards) of one of the scientists (Richard Anderson), convinced that the girl is the reincarnation of his lost love. An uninspired rehash of The Mummy (1932), Curse of the Faceless Man was originally released on a double bill with the superior It! The Terror From Beyond Space; both films were scripted by science fiction author Jerome Bixby and directed by Edward L. Cahn.

Bob Bryant
as Quintillus
View All

Critic Reviews for Curse of the Faceless Man

The faceless man comes alive, mayhem ensues, and audiences realize that, despite its monotony, the film is still easier to take than Paul W.S. Anderson's 2014 turkey Pompeii.

Its surfside climax is pure pulp poetry that functions as both a literal dramatization and a romantic evocation of the devastation wrought by the tides of time as they break against the eternal shore of love.

Recommended for only die-hard fans of Edward L. Cahn

There are no featured reviews for Curse of the Faceless Man at this time.

Curse of the Faceless Man Quotes