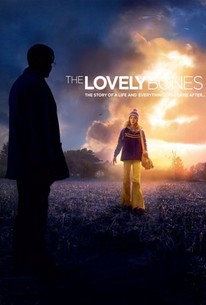 Fourteen-year-old Susie Salmon (Saoirse Ronan) is just experiencing the pangs of first love when she's viciously murdered by her neighbor Mr. Harvey (Stanley Tucci), a predatory wolf with a deceptively mundane appearance. As her family slowly begins drifting apart while struggling to make sense of their loss, Susie bravely attempts to find her footing in the hereafter. Meanwhile, down on earth, Mr. Harvey is feeling confident that he's covered his tracks well enough to get away with the crime, and begins honing in on his next victim -- Susie's younger sister, Lindsey (Rose McIver), who's beginning to suspect that he's not the harmless suburbanite he portrays himself to be. Director Peter Jackson reteams with King Kong and Lord of the Rings trilogy co-screenwriters Philippa Boyens and Fran Walsh to adapt Alice Sebold's bestselling novel for the big screen. ~ Jason Buchanan, Rovi

News & Interviews for The Lovely Bones

View All The Lovely Bones News

Critic Reviews for The Lovely Bones

Both [Saoirse] Ronan and [Stanley] Tucci are worth the price of an admission ticket.

It's an interesting way to tell a heartbreaking story a young girl whose life was taken away too soon, and whose family fights to pull the pieces together after their loss.

The Lovely Bones does a fantastic job with revered, complex source material. As terrific on terra firma as it is audacious in its astral plane, it is doubtful we'll see a more imaginative, courageous film in 2010.

Under the hammy direction of Peter Jackson The Lovely Bones has lost its poetic bone structure. What was a complex, quirky novel has been turned into a movie mishmash of Lord of the Rings and High School Musical, with a serial killer thrown in.

Instead of a compelling nightmare, he has created a bland, girly-sparkly dream.

It's an extraordinary folly. A turkey, a pig's ear, a mad cow of a film. Its treatment of bereavement and familial grief is crazier than anything Lars Von Trier came up with in Antichrist.

Brilliant performances by all involved are about the only things that remain consistent.

I was drawn to the film because of Peter Jackson's involvement, but the creativity of the imagery did not astound me.

The emotional core of The Lovely Bones should be closer to Heavenly Creatures, but Jackson has sacrificed feeling for effect.

Like Jackson missed the target completely and instead hit the cat standing 30 feet away from it.

Despite all its promise, the film left me cold. I just never completely bought into the experience, which seemed to be calculated and lacking the heart and depth it so desperately wants to convey.

Audience Reviews for The Lovely Bones

It pains me to see this huge mistake made by Peter Jackson, a ridiculous blend of contrived thriller, unconvincing drama and pathetic afterlife fantasy full of self-indulgent CGI effects - and even worse is the despicable way that it wants us to accept the murder of a 14-year-old girl as part of life.

The Lovely Bones it's a dazzling and beautiful way to see another side of a murder. The boring and exhausting screenplay, with a cliche teen romance, a strange girl (this character is almost always in a teen movie) and the running time, just get worse Peter Jackson's sentimentalist movie. The strong tension and violence with the appellative dramatic scenes doesn't have a good chemistry in the script. Almost everything don't make The Lovely Bones a, at least, nice film to watch, the only great and sincere thing in whole picture is the outstanding performance by Stanley Tucci, a very good actor that just now is recognized by the Academy. Rotten.

Although this isn't really a horror for me still it's classified under horror. I can understand that some people will find it gruesome due the subject but I must say that it had no drip of red stuff in it. Not that that is important, just look at Texas Chainsaw or Halloween, they were bloodless too. Nevertheless, I really enjoyed this creepy flick. It reminded me a lot of The Loved Ones somehow, it must be the use of slow motion and the score. On the other hand it also reminded me of Heavenly Creatures by the way they used the dream sequences. It's a special flick coming from the hand of Peter Jackson. Knowing him for splatter and gore in his earlier days this could be a let down for some but I really liked it the way it was shot and the use of CGI didn't bother me at all. Not for everyone but if you can stand weird flicks than this won't be a problem for you. 3 1/2 Stars 4-6-13

So I had a review here about this movie but Flixster decided not to save it. Basically it was good but some of it was boring and out of place, it could have been so much better.