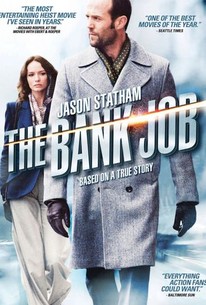 A car dealer with a dodgy past and new family, Terry has always avoided major-league scams. But, when Martine, a beautiful model from his old neighborhood, offers him a lead on a foolproof bank hit on London's Baker Street, Terry recognizes the opportunity of a lifetime. Martine targets a roomful of safe deposit boxes worth millions in cash and jewelry. But, Terry and his crew don't realize the boxes also contain a treasure trove of dirty secrets--secrets that will thrust them into a deadly web of corruption and illicit scandal that spans London's criminal underworld, the highest echelons of the British government, and the Royal Family itself--the true story of a heist gone wrong, in all the right ways.

Gerard Horan
as Roy Given

Louise Chambers
as The Princess

News & Interviews for The Bank Job

New on Netflix in February 2021
New on Netflix: Gotham, How to Get Away with Murder, And More Streaming Options
Best and Worst Movies of the Furious 7 Stars

View All The Bank Job News

Critic Reviews for The Bank Job

The first half is particularly strong, and while none of the pre-heist team building or preparations are anything we haven't seen many times before these scenes are handled with such dynamic virtuosity they almost feel original and new.

It's something new for heist pictures: a movie that can't even rip off its predecessor with any panache.

The Bank Job is nothing more than an efficient time-killer with the added bonus of being based on a real misadventure. But, unlike its benighted cast of characters, it gets the job done without a hitch.

A tight, classic-feeling film about losers banding together for one big score, then scrambling furiously as they realize they're in over their heads. It's fast, nifty, sharp and sweet.

Thanks to the twin pens of screenwriters Dick Clement and Ian La Frenais, what a jam-packed and misanthropic fiction this is.

Longtime screenwriters Dick Clement and Ian La Frenais have woven a masterful narrative full of odd twists and dark humor from which Australian director Roger Donaldson and a prime cast mine plum characters and a tight plot to satisfying effect.

All in all, this is a job well done.

...it's difficult, for the most part, not to get drawn into the progressively over-the-top twists and turns contained within.

A fascinating look at criminals, their equally corrupt counterparts on the opposite side of the law, and many a gray-area hoodlum.

The Bank Job is easily one of the most crowd-pleasing action films in recent memory, full of strong characters and witty dialogue.

May not be the best evocation of '70s filmmaking of recent years, but it is still a very good, middle-of-the-road kind of entertainment that is hard not to like and respect.

Some great heist films concentrate on the quiet craftsmanship of the big score; and some very good ones, like The Bank Job - wild and willfully shaggy - prefer to revel in the sport of thievery.

Audience Reviews for The Bank Job

A London model is arrested for drugs trafficking by MI5 and blackmailed into arranging the robbery of a Bank vault to reclaim some embarrassing photographs used by a corrupt black activist to obtain immunity. I wish Jason Statham would stop trying to be the cockney Van-Damme because this is what he is really good at. One criticism you could instantly level at this film is that the plot is so far-fetched, but bizarrely it's actually a true story. At the beginning it appears to be a decent if slightly run-of-the-mill heist movie as the usual collection of lovable East End villains plan and execute their scam but it's actually after the event that this film gets really interesting. The tone darkens and as it gets more hard-boiled and grim, the better it gets. The direction can seem a little hurried as it tries to cram in all the relevant threads, but solid writing intertwines the several sub plots cleverly and its constantly entertaining. Darker, grittier and above all better than all of the Ocean's films and a great, unpretentious, old-fashioned British crime drama that can stand shoulder to shoulder with the best of them. Well worth checking out if you enjoyed the similar and Academy Award winning Argo.

Recommended for the fan of bank heists, it has a decent plot that keeps you following however the biggest point is that it's a true story.

Taking a glance at the title, preconceived notions popped out, telling me that this was gonna be one of those movies where a crew with individual talents are gonna be made up to pull off the perfect heist. Typical heist movie, right? Wrong. "The Bank Job" interweaves a clever narrative with genuinely thrilling moments. There's a lot to like about "The Bank Job". First off, we're gonna needa bring Jason Statham back in the acting game because he fills in the shoes of the main character quite well. And during the ride, there's a stellar script, driving the story forward in an entertaining fashion. The narrative's tight, fast, and takes interesting turns, and there's some gripping scenes. Unfortunately, near the 3rd act of the movie, the movie begins to become a bit stale. "The Bank Job"'s real killer though is the lack of substance. Yes, it's based on a true story and by the finale, there is a conclusive wrap up that goes beyond just a simple heist, but it seems nothing more than an entertaining time-passer-by. "The Bank Job" is an enjoyable movie. It's a good movie, but not a great one.

[img]http://images.rottentomatoes.com/images/user/icons/icon14.gif[/img] A fairly simple, yet entertaining heist thriller. Although devoid of a consitent tone and pacing that's slightly uneven, The Bank Job is a highly likable and sometimes hilarious movie. It's greatest trait is the brilliant casting and the crisp direction by Roger Donaldson. It's a thoroughly entertaining crime flick with enough tension, slickness and style. It's not the best out there but it redeems itself enough to make it stand out from, your average heist movie.