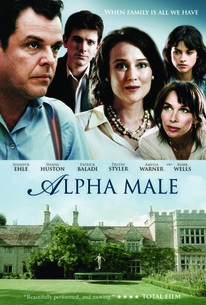 The feature debut from writer/director Dan Wilde this British drama centers on a family split apart in the wake of its patriarch's death. Jennifer Ehle stars as widowed Alice, who eventually moves on and remarries, a move that has a devastating effect on her son Jack, played by Mark Wells. Years later, the family reunites and long-supressed feelings are finally revealed. Alpha Male also stars Danny Huston.

There are no critic reviews yet for Alpha Male. Keep checking Rotten Tomatoes for updates!

There are no featured audience reviews yet. Click the link below to see what others say about Alpha Male!