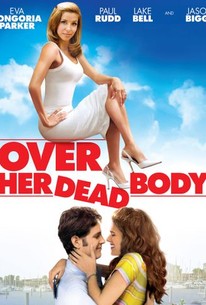 Critics Consensus: With few laughs and little romantic chemistry, Over Her Dead Body lacks the ingredients of a successful romantic comedy.

Critics Consensus: With few laughs and little romantic chemistry, Over Her Dead Body lacks the ingredients of a successful romantic comedy.

Critic Consensus: With few laughs and little romantic chemistry, Over Her Dead Body lacks the ingredients of a successful romantic comedy.

Over Her Dead Body Photos

Devastated when his fiancée Kate is killed on their wedding day, Henry reluctantly agrees to consult a psychic named Ashley at the urging of his sister Chloe. Despite his skepticism over her psychic abilities, Henry finds himself falling hard for Ashley, and vice versa. But there is a big snag. Ashley is being haunted by Kate's ghost, who considers it her heavenly duty to break up Henry and Ashley's fledgling romance, if it is the last thing she does on this earthly plane.

Critic Reviews for Over Her Dead Body

The film -- pinched from Ghost in every relevant particular -- is pretty moderate.

[An] offense of a ghost comedy.

A desperately unfunny farce that doesn't need an audience so much as an exorcist.

Lowell has little to say about loss and love. But there's a talking parrot, and on some days, that's enough.

You may remember Noel Coward's Blithe Spirit. This is Bleh Spirit.

The kindest context in which to put Over Her Dead Body, which was written and directed by Jeff Lowell, is that of a training film, a public display of people trying to master their craft. The best way to see it is not at all.

the audience are acquainted in no uncertain terms with the environs of hell...

It's not really about love or death; nor is it much fun.

Not a life-changing romantic comedy, but it's funny enough, has charming leads and breezes by in its quick 97 minutes.

Ghost-lite romantic comedy is only so-so.

... neither funny, charming or anything else that will make it a memorable hour and a half of viewing pleasure.

Audience Reviews for Over Her Dead Body

this movie is obvious and predictable that leaves nothing to the imagination, although the concept is different and it has potential but the script is its failure and is funny in places but not really rememberable or worth the watch for a second time.

Oh dear, what a mess. (That's all I can write without become judgmental and catty.)

Over Her Dead Body Quotes