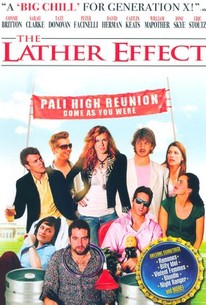 A handful of old friends learn you can go home again, but you'll also have to clear out the damage the next morning in this bittersweet comedy-drama. Valinda (Connie Britton) is a woman in her late thirties who is helping her parents sell the house where she grew up. A few days before the house is to be cleared out, Valinda decides to hold an Eighties theme party for all her old high school friends. The next morning, the house is a staggering mess, while Valinda and her pals are simply staggering. As they battle their hangovers with the hair of the dog, Valinda persuades her friends to help her clean up the aftermath, and over the course of the day everyone find themselves looking back on who they were and where they are now. Valinda's husband Will (Tate Donovan) is a solid, responsible guy who happens to be a bit boring. Zoey (Ione Skye) likes to think of herself as happily married, but she knows her relationship with Jack (William Mapother) is in trouble, especially since he still carries a torch for Valinda. Katrina (Caitlin Keats) is a doctor who enjoys a successful professional life, but on a personal level she's suffered through a long series of failing relationships that she's not sure will ever end. Corey (David Herman) enjoyed a brief fame as a child actor that has left him emotionally stunted. Claire (Sarah Clarke) is a sweet and sensible Midwestern wife and mom, but she's never been able to shake her love for her high school sweetheart, who (to her chagrin) didn't show up for the bash. And Mickey (Eric Stoltz) has hardly changed a bit -- he was a world-class party animal in his teens, and still cheerfully revels in alcohol and drugs. The Lather Effect is the first fiction feature from writer and director Sarah Kelly, who previously made the documentary Full Tilt Boogie (about the production of the movie From Dusk Till Dawn).

Tate Donovan
as Will

Larry Bishop
as Dom at the Door

Critic Reviews for The Lather Effect

There are no critic reviews yet for The Lather Effect. Keep checking Rotten Tomatoes for updates!

Audience Reviews for The Lather Effect

There are no featured audience reviews yet. Click the link below to see what others say about The Lather Effect!