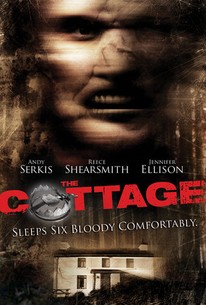 A criminal scheme gone wrong is just the start of a string of life-threatening bad luck in this darkly comic thriller. David (Andy Serkis) and Peter (Reece Shearsmith) are a pair of second-rate criminals who are eager to make a big score and think they've come up with the formula for a perfect crime. David works for a wealthy local businessman named Arnie who dotes on his teenaged stepdaughter Tracey (Jennifer Ellison), and so with the help of Arnie's slacker son Andrew (Steven O'Donnell), he and Peter kidnap the girl and demand a hefty ransom for her safe return. But Tracey puts up far more of a fight than David and Peter ever expected, and when Andrew picks up the ransom only to discover they've been given a decoy instead of cash, the would-be kidnappers have no clue what to do next. But this problem seems like small potatoes when the owner of the seemingly abandoned cottage where they're holed up unexpectedly returns -- he turns out to be a hideously deformed lunatic with a murderous temper and a bitter hatred of trespassers.

Dave Legeno
as The Farmer

Jonathan Chan-Pensley
as Chun Yo Fu

News & Interviews for The Cottage

View All The Cottage News

Critic Reviews for The Cottage

Nice performances from Shearsmith and Serkis, and some outrageous ketchupy grossout, though I have to say The Cottage has nothing like the rigour, originality or power of Williams's debut.

This film is fabulously deranged.

This is cartoon carnage with a slightly surreal twist - most notably in Peter's encounter with a swarm of moths - but the developing bond between the brothers makes it surprisingly poignant too. All things considered, you'll forgive the shaky parts.

Andy Serkis shouts a lot, as if raising the decibel level will compensate for the dire dialogue, while Jennifer Ellison displays more cleavage than acting ability.

Frightfest regulars and hungry gorehounds will get a kick out of this, but those who hailed Williams as a Brit-indie visionary after London To Brighton might be left scratching their heads.

The Cottage is a film that knows how to play to its strengths, namely making the most of its modest budget and not even attempting to break the B-movie glass ceiling.

'The Cottage' doesn't have enough horror to satisfy horror fans and not enough comedy to satisfy everybody else.

The degree to which the movie is redeemed by its impossible-to-anticipate third act is consequently quite staggering...

The Cottage, against the odds, makes a better caper movie than gore flick.

Broad comedy and splattery horror are a pretty tough combo to pull off, but if anyone can do it ... the British can.

Audience Reviews for The Cottage

Brit comedy horror and damn funny. Well worth a watch, turn your brain off and just enjoy yourself.

First things first. Reece Shearsmith's character in The Cottage was one of the most annoying characters I've ever encountered in a movie. All his spineless cringing, screaming, and his general uselessness, made me want to climb somehow into the movie and kill him. Yes, I know the character was intentionally written that way, and in no manner is this a criticism of the movie. I'd actually like to commend the director, writer(s), and Reece himself, for creating such a thoroughly annoying character. Now, on to the review. I liked the first half of The Cottage more than the second. The initial half was fairly humorous, and gave off an enjoyably creepy vibe. I was eagerly anticipating the arrival of some vague threat, while gleefully cheering for Ellison's rather intimidating prisoner. Serkis was also in fine form, as his character struggled to salvage some kind of plan amidst the overwhelming incompetence of his cohorts. The second half of the movie is basically a decidedly average slasher-film. Not awful, but nothing special. I found myself missing the humor of the first 40 minutes. Depending on your preference for that genre, you may end up liking The Cottage more than I did. It only came to my attention because of the presence of Jennifer Ellison, but I'm glad that I ended up seeing it.

Hilariously bloody and bloody hilarious! This comedy-horror is like Texas Chainsaw Massacre in Britain as well as I like two rival siblings played by Andy Serkis and Reece Shearsmith, who forced into hiding after their kidnapping plan goes awry, are so hilarious at the beginning before the horror stock happened after the hostage escaped.