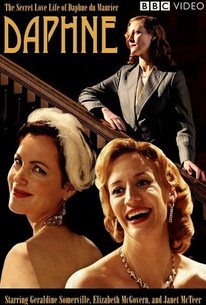 As is well-known and frequently discussed, the gothically-inclined English woman of letters Daphne Du Maurier (Don't Look Now, Rebecca) also happened to be a lesbian, but virulently suppressed these inclinations given her beloved father's abhorrence to homosexual behavior - attitudes that Du Maurier imbibed and that gave her lifelong pangs of guilt and self-denial. She experienced two life-altering homosexual loves, however: an irreciprocal one for heterosexual Ellen Doubleday, the wife of her publisher Nelson Doubleday, and another for bisexual actress Gertrude Lawrence (Private Lives), which Lawrence purportedly helped her consummate. As created for Du Maurier's centenary, Claire Beavan's BBC production Daphne dramatizes the connection between these two relationships; Beavan pulls from private letters and memoirs to depict the series of events by which Du Maurier (here played by Geraldine Somerville) fell into an impassioned love for Doubleday (Elizabeth McGovern), and how the unrequited nature of that love spurred her on to author a play about forbidden romantic longings, September Tide - a play that, ironically, introduced her to the second great love of her life, Lawrence (Janet McTeer). In so doing, the film not only resurrects a long-buried and hidden part of Du Maurier's life, but explores the connection between life experiences and highly personalized artistic expression. ~ Nathan Southern, Rovi

There are no critic reviews yet for Daphne. Keep checking Rotten Tomatoes for updates!

There are no featured reviews for Daphne at this time.