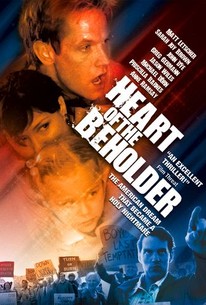 Heart of the Beholder Photos

Heart of the Beholder tells the harrowing true-life tale of an entrepreneurial young couple who owned an operated St. Louis' first videocassette rental store, and the challenges faced by their growing family when religious zealots from Rev. Donald Wildmon's National Federation for Decency (later renamed the American Family Association) launched a frightening campaign designed to intimidate them into removing movies deemed by the group to be ". . .obscene or a detriment to the community and its children." When Martin Scorsese's The Last Temptation of Christ was originally released on home video, the majority of St. Louis video stores buckled to pressures by religious groups not to offer the film for rental. Ken and Carol Tipton - owners of a videocassette rental store known as the Video Library - refused to give in to the demands of the group they saw as modern day book burners, and as a result their store was picketed, and the life of their young daughter threatened. When the Tiptons refused to give in to the demands of the NFD, the case went to court. Unfortunately for the Tiptons, the NFD used scandalous information about the Prosecuting Attorney's secret sex life to blackmail the prosecutor. Later, due to the misuse of RICO racketeering laws, multiple movies from the Tiptons' store were confiscated before the jury found even a single video obscene. After the prosecutor made vague and damning references indicating that the Tiptons had ties to organized crime, the family was shunned by the community. Yet while the Tiptons subsequently emerged victorious in two court cases, the damage had already been done: Negative publicity had caused the family to become fragmented, and mounting court fees forced their business to go bankrupt. Later divorced from his wife and stuck in a suicidal depression, Ken ultimately made an accidental discovery that would not only turn his life around, but also expose the corruption and hypocrisy that nearly destroyed him.

Susan Johnston
as Joan
View All

Critic Reviews for Heart of the Beholder

Clear, to the point but not entirely grabbing.

A disturbing story that is worth telling.

There are no featured reviews for Heart of the Beholder at this time.

Heart of the Beholder Quotes