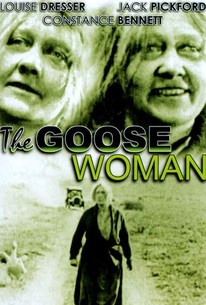 The Goose Woman was inspired by the notorious Hall-Mills murder case, wherein a woman known as the "Pig Woman" was wheeled into court on her sickbed to provide damning testimony. Louise Dresser plays Marie du Nard, a celebrated opera diva who loses her voice and her reputation after giving birth to an illegitimate son. Reverting to her given name of Mary Holmes, she returns to her hometown, living in a squalid shack and raising geese. Years later, a headline-making murder case is played out in her town. Hoping to capture her past celebrity, Mary claims to be a witness to the murder. Her dreams of glory abruptly fade when she discovers that her grown son Gerald (Jack Pickford) is implicated in the crime. An excellent film by any standards, The Goose Woman served to solidify the reputation of director Clarence Brown.

Critic Reviews for The Goose Woman

Only mildly interesting as a tearjerker.

There are no featured reviews for The Goose Woman at this time.