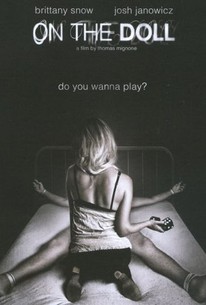 On the Doll Photos

A handful of strangers living on the edge of Los Angeles' sex industry share a terrible secret in this psychological drama. Jimmy (Paul Ben-Victor) is a small-time kingpin in California's underground sleaze empire, and he runs a strip club and peep-show arcade where Tara (Angela Sarafyan) displays her body for paying customers. Tara is working off a sizable debt to Jimmy, and her boyfriend, Jaron (Josh Janowicz), meets with Jimmy's business partner Uncle Lou (Marcus Giamatti) to find out what it would cost to clear her bill. Eager to make some fast money to pay off Jimmy, Jaron teams up with Balery (Brittany Snow), a hooker who wants to get even with an abusive regular customer. One of Jimmy's more unlikely colleagues is Mr. Garrett (Eddie Jemison), a high-school teacher who learns that two of his students, Courtney (Chloe Domont) and Melody (Candice Accola), are attracted to him. Garrett decides to introduce the girls to Jimmy, who wants to lure them into a career in pornographic modeling. And Wes (Clayne Crawford) is a self-centered musician whose career has yet to take off; needing money, he allows his girlfriend, Chantel (Shanna Collins), to earn their keep by working as a streetwalker. Also starring Theresa Russell and James Russo, On the Doll was the first feature film from director Thomas Mignone, who previously distinguished himself making music videos.

Critic Reviews for On the Doll

...hardly packs the profound punch that Mignone is clearly aiming for...

Memorable more for its performances than its plot, this scrappy independent doesn't fade from the mind quickly

Audience Reviews for On the Doll

Almost switched it off, but glad I persevered. There are a few too many characters to keep track of, but once you've got it it is not so hard to follow. Most of the characters are damaged teens working either as hookers or strippers and it brushes lightly over the circumstances of their lives which drew them to that line of work. Pretty sad viewing, quite honestly. I felt sorry for all of them. Particularly the girl whose boyfriend was hooking her to buy stuff and the one who was being held to ransom.

Meh I really don't know what to say about the movie, I mean it's ok. The subject matter is pretty unique so there's that going for it, but I never really got into the movie for some reason. It just didn't seem to hold my attention, but the movie was alright for what it was.

A small indie hit which similar to many others in narrative. We see many different stories each in some way involving sex, whether it be sexual abuse, prostitution or hitting a guy in the balls. Of course each of these stories is on course for a linked together finale. It happens in quite a coincidental fashion like Magnolia but only just carries it off. Some of the dialogue is pretty good and the film moves at a good pace giving equal screen time to each story. Despite all the hard subjects it deals with it maintains a certain level of maturity by never showing any of the sexual acts. It's a good jo the actors are able to pull off good enough performances to convince of the shocking nature of things. Wonderfully shot and with Brittany Snow still coming off as beautifully hot depie punching a guy into unconciousness it is bothpleasurable and difficult to watch in equal measure.

On the Doll Quotes