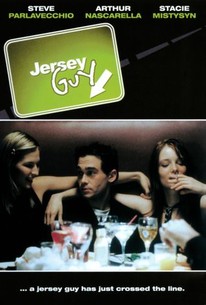 A twenty-five year old New Jersey man who lives with his parents and can't commit to his longtime girlfriend begins to wonder if he's missing out on something more in life after meeting a bored but beautiful SoHo club hopper and hobnobbing in the Hamptons with a group of jaded sophisticates. Jack (Steve Parlavecchio) works in a New Jersey nursing home. He's always maintained a positive attitude, but lately he's beginning to wonder whether his life has come to a stand still. Despite the fact that Jack and his girlfriend Susan (Stacy Mistysyn) have been dating for seven years now, Jack can't seem to muster the motivation to ask for her hand in marriage. On evening, during a rare outing to a SoHo nightclub, Jack makes the acquaintance of beautiful model Samantha (Jill Wolfe). The encounter leaves Jack wondering if he's settling for something less than he truly deserves, and in the following weeks he begins shunting Susan aside in favor of spending more time with Sam. The entire time, Jack seems entirely oblivious to the fact that the movers and shakers who comprise the Hamptons elite seem just as bored with their lives as he once was with his.

Shannon Burkett
as Ingrid
View All

Monotonously paced and too long.

Droopily unravels as partial homage to the Balki Bartokamous school of bad acting before collapsing into a mess of fragmentary sermonizing on deceit, commitment, and the meaning of choice.

This poky, character-driven comedy gets up-close and a little too personal with Jack Sheldon.

Obnoxious to the point of being emetic.

There are no featured reviews for Jersey Guy at this time.