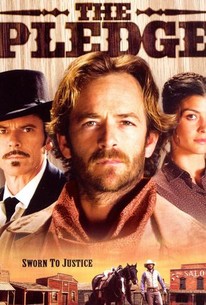 A vengeful sheriff sets out to capture the escaped convict who murdered his wife and son in this gunpowder stained western starring Luke Perry and C. Thomas Howell. When his family was killed, Sheriff Matt Austin swore that he would take violent revenge on the man responsible for that woeful misdeed. But when Sheriff Austin discovers that the very same villain has been hired by a wealthy land baron to steal some valuable land from a terrified widow and her young son, he realizes that he must act quickly before any more lives are lost. ~ Jason Buchanan, Rovi

Critic Reviews for A Gunfighter's Pledge

Audience Reviews for A Gunfighter's Pledge

There are no featured audience reviews yet. Click the link below to see what others say about A Gunfighter's Pledge!