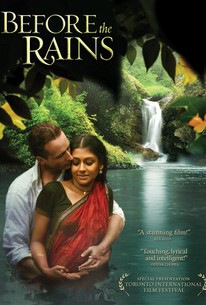 Before the Rains Photos

Set in 1930s southern India against the backdrop of a growing nationalist movement, "Before the Rains" is the English language debut of acclaimed Indian director Santosh Sivan. An idealistic young Indian man finds himself torn between his ambitions for the future and his loyalty to the past when people in his village learn of an affair between his British boss and a village woman.

Satheesh Poduval
as The Kammadan

Critic Reviews for Before the Rains

Expectedly, the cinematography is superb. And Rahul Bose as the conflicted handyman stands out. The rest of it is quite linear and ordinary.

Mechanical through and through.

Here is a movie that the late Ismail Merchant would have been happy to have under the Merchant-Ivory banner. James Ivory is very much alive and working, and one assumes he approves as well.

Acting honours go to Bose, his face an eloquently shifting register of shame, calculation and sympathy.

Filmed on location, Before the Rains is beautiful to watch and skillfully employs the talents of its cast. It is a humane piece.

Before the Rains is an immediate disappointment.

If only the whole thing weren't so pretty.

Has the moral overtones of an EM Forster story, but is curiously lacking in emotional force.

While not without its merits (the performances of Jennifer Ehle and Rahul Bose are particular highlights), Before the Rains ultimately suffers from a downpour of melodrama.

The film certainly looks beautiful as it captures the lush beauty of its mountainous, green Indian landscape, but acclaimed cinematographer turned director Santosh Sivan is only partially successful when it comes to the storytelling

Audience Reviews for Before the Rains

Things do not end well for a love affair between two different races and casts set in India as colonial rule is ending. The Indian scenery is worth the watch.

In "Before the Rains," it is 1937 in Kerala, India where Henry Moores(Linus Roache) is a planter who is building a road to help his business, risking everything to finish it before the monsoons start. On the personal side, even though he is married, he is carrying on an affair with Sajani(Nandita Das), the family maid, who is trapped in an abusive marriage. One day, the lovers are noticed in a sacred grove by a pair of boys. If "Before the Rains" sounds as predictable and obvious as every other doomed romance you have ever heard of, you would be at least partially right.(What was it Anton Chekhov said about guns, again?) What separates this movie from others of its ilk is the lack of sympathy given to its lead English character who has no true regard for India which is also undergoing spasms of independence. That along with lush cinematography combine to provide a sincere feel for a time and place.

Great movie. Good story plot. Here is a movie by Santosh Sivan. This is a movie that captivates you, and it holds such a great interest that you are left feeling intrigued. Great cast- Nandita Das, Linus Roache, and Rahul Bose. Amazing music. Definitely worth seeing.

I liked it, but I would have liked it about the same if everything was cut out except the music and the shots of scenic India.

Before the Rains Quotes