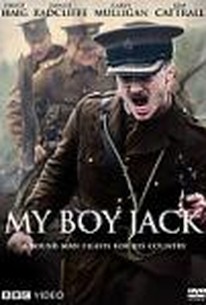 Critics Consensus: While the script may lack insight and excitement, My Boy Jack features strong performances from Daniel Radcliffe and Kim Cattrall that alone make it worth watching.

Critics Consensus: While the script may lack insight and excitement, My Boy Jack features strong performances from Daniel Radcliffe and Kim Cattrall that alone make it worth watching.

Critic Consensus: While the script may lack insight and excitement, My Boy Jack features strong performances from Daniel Radcliffe and Kim Cattrall that alone make it worth watching.

Actor/writer David Haig pens and stars in this war drama tracing author Rudyard Kipling's search for his seventeen year old son after the boy is reported missing during World War I. Jack Kipling (Daniel Radcliffe) has vanished, prompting concerned parents Rudyard (Haig) and his wife to set out in search of their son. Based on the 1997 play of the same name, this BAFTA-nominated drama co-stars Kim Cattrall and Carey Mulligan. ~ Jason Buchanan, Rovi

Critic Reviews for My Boy Jack

I cried. We all cried, I don't doubt. Not a dry eye in any house.

He'd captured, too, the torture of hope that Jack's parents found themselves exposed to - the word"Missing"on the telegram sending them scouring through photographs of prisoners of war to see if their son might still be alive.

My Boy Jack was - I see no excuse for deceiving you, as Owen wrote to his mother - a disappointment.

Ms. Cattrall's odd inclusion adds a spark and leaves you with something to talk about. Otherwise "My Boy Jack" is like a well-made hospital bed, all four corners too tightly tucked.

"My Boy Jack" is the kind of little gem that affirms "Masterpiece" as a worthy TV showcase.

While his stature as one of the great writers of the English language is communicated only twice... the effect in both cases is stunning.

The real revelation, though, is Kim Cattrall as Jack's mother Carrie, a formidable woman who never gave up hope, until presented with terrible evidence to the contrary, that her son would return home.

As for Cattrall and Radcliffe, it's one of those cases where it's a bit weird seeing them out of their normal characters... Their performances are not bad as a whole, but they are, at times, very stiff.

Radcliffe created an entirely convincing sense of a young man trying unconvincingly not to be scared - and doing his unconvincing best to impersonate a grown-up.

The message nevertheless resonates powerfully throughout a movie that deserves to be seen beyond the customary "Masterpiece" contingent, Hogwarts and all.

Here [Radcliffe] is given a bit more to work with, and he simply soars. He is the heart of the film, even when he's not onscreen.

Audience Reviews for My Boy Jack

Surprisingly strong film, but it would have been more thought provoking with deeper examination of the post-mortem effects on the family. Jack's sister virtually vanishes from the struggle, and Kipling's interaction with the king is so devoid of expression (at least as to Jack) as to become filler. Kim Cattrall's performance was magnificent and makes the movie worth seeing on it's own. Kudos to Daniel Radcliffe for continuing to step outside the Harry Potter box and proving he's an actor of substance beyond the franchise.

Sad, extremely well acted tale of the senselessness of war and one family's experience. The father in this story is famous but it doesn't make their struggles any less universal. Daniel Radcliffe is terrific once again showing that he will be able to have a lifelong career far removed from Harry Potter. This is really a four person story and he is matched in excellence by the other three players, David Haig, Kim Cattrall and Carey Mulligan. A very moving story presented with great skill.

The true story of Rudyard Kipling's son John who joined the British Army at the outset of the first World War. Like most BBC/PBS productions, My Boy Jack is nicely acted, tightly edited and modestly budgeted. It conveys the story efficiently without the frills and fluff associated with Hollywood productions. In general, people either love BBC films or they avoid them. I'm certainly not among the latter.

My Boy Jack - A young man fights for his country.. Author Rudyard Kipling and his wife search for their 17-year-old son after he goes missing during WWI.. I was impressed with this.. not what I was expecting.. really liked this..