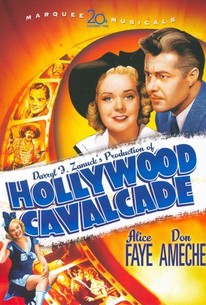 Hollywood Cavalcade was a fictionalized history of silent films and the growth of the movie industry. Don Ameche portrays a character based on equal portions of Mack Sennett and D. W. Griffith, while Alice Faye's silent star is an amalgam of Mabel Normand and Gloria Swanson. Ameche breaks into pictures with slapstick comedies, initiating the first "pie throwing" scene, with Buster Keaton the thrower and Alice Faye the throw-ee. Thanks to Ameche, Faye becomes a major comedy star, appearing in wild Keystone Kops chase comedies. But success goes to Ameche's head, and soon he's staging elaborate Intolerance-like historical spectacles. As Ameche's artistic aspirations climb, his relationship with the faithful Alice deteriorates. She finds solace with her young leading man (Alan Curtis) and becomes a top dramatic star. Having made and lost several fortunes, Ameche talks Alice into appearing in his "comeback" picture, but shortly before filming ends, she and her husband are in a serious auto accident. The husband is killed, and as Faye recuperates, Ameche agonizes over how he'll save his uncompleted masterpiece. He witnesses the premiere of Al Jolson's part-talking The Jazz Singer and decides to risk everything by scrapping his film and remaking it as a talkie. Faye, who's never really stopped loving Ameche, agrees to star in this new project. On a level of accuracy, Hollywood Cavalcade is for the birds, but it scores on its energetic performances and nostalgic appeal. As a bonus, several past movie greats appear in cameos: Al Jolson, Buster Keaton, Mack Sennett, Ben Turpin, Chester Conklin, Jimmy Finlayson, Hank Mann and even Rin Tin Tin Jr.

Jed Prouty
as Chief of Police

Buster Keaton
as Himself

Ben Turpin
as Bartender in Western

Chester Conklin
as Sheriff in Western

Lee Duncan
as Himself

Mack Sennett
as Himself

Al Jolson
as Himself

This is a generous tip of the hat to the dawn of cinema, which should appeal to any movie lover.

Hoary old chestnut in dazzling Technicolor is a thinly veiled account of Mack Sennett"s rise and fall. He was involved in the production in a minor capacity. Alice doesn't even sing.