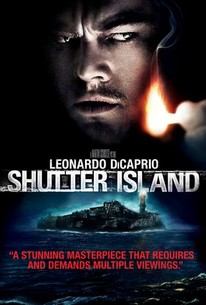 Critics Consensus: It may not rank with Scorsese's best work, but Shutter Island's gleefully unapologetic genre thrills represent the director at his most unrestrained.

Critics Consensus: It may not rank with Scorsese's best work, but Shutter Island's gleefully unapologetic genre thrills represent the director at his most unrestrained.

Critic Consensus: It may not rank with Scorsese's best work, but Shutter Island's gleefully unapologetic genre thrills represent the director at his most unrestrained.

Martin Scorsese and Leonardo DiCaprio team up for a fourth time for this adaptation of Shutter Island, a novel by Dennis Lehane (Mystic River). The film opens in 1954 as World War II veteran and current federal marshal Teddy Daniels (Leonardo DiCaprio) and his new partner, Chuck (Mark Ruffalo), ferry to Shutter Island, a water-bound mental hospital housing the criminally insane. They have been asked to investigate the disappearance of Rachel Solando (Emily Mortimer), a patient admitted to the asylum after she murdered her three children. As Teddy quizzes Dr. Cawley (Ben Kingsley), the head of the institution, he begins to suspect that the authorities in charge might not be giving him the whole truth, and that a terrible fate may befall all the patients in the spooky Ward C -- a unit devoted to the most heinous of the hospital's inmates. Complicating matters further, Teddy has a secret of his own -- the arsonist who murdered his wife is incarcerated on Shutter Island. Driven to confront his wife's killer, and stranded on the island because of a hurricane, Teddy must unravel the secrets of the eerie place before succumbing to his own madness. Max von Sydow, Emily Mortimer, Michelle Williams, Patricia Clarkson, and Jackie Earle Haley round out the supporting cast. ~ Perry Seibert, Rovi

It's supposed to be some suspense thriller... somebody should have said hey why don't you go see the hilarious comedy of Shutter Island.

It's not a serious film and it's not even an especially suspenseful film but it is fun, in a Dr Caligari sort of way.

A twisted psychological thriller that leaves you guessing until the very end, Shutter Island is yet another fantastic collaboration between DiCaprio (giving another pitch-perfect and near heartbreaking performance) and director Martin Scorsese.

The problem, then, arrives in the film's hurried final act, where a hitherto steady narrative gives way to an engorged twist that, whilst believable, insults the audience's comprehension of everything that has come before.

So jump on that ferry and prepare for a stomach-churning crossing. Just don't blame me if you end up marooned.

A relentlessly chilling mystery and a white-knuckle thriller.

Mark Ruffalo breaks away and serves up what may very well be his best performance to date.

Neither the book nor the film of Shutter Island, unfortunately, has the courage of its convictions. It would have been more on point if Scorsese had given real expression to the spirit and traumas of the mid-1950s.

The worst of Scorsese's career by a long, long way.

Unfortunately, Shutter Island is somewhat hobbled by our sense that Scorsese is slumming in the schlock-fest thriller genre.

Shutter Island is a very well made film that captures the genre of mystery similar to the Twilight Zone episodes and the renowned Hitchcock films.

Scorsese's masterpiece in psychological horror is an intriguing and immensely unsettling film whose escalating claustrophobic tension is built from an intelligent, suspenseful mystery that bears many welcome resemblances to the greatest works of Kubrick, Polanski and Lynch.

An admirable film from the legendary Martin Scorsese about a troubled detective (Leonardo DiCaprio) who takes on a case at a psych ward on a remote island, before he starts to lose his grip on his sanity and what reality is anymore. This is a consistently interesting, thought-provoking, and ultimately soul-crushing movie that, while slowly paced, remains interesting throughout. It is no where near perfect or one of Scorsese's best films, but it is still a good one that deserves to be seen mainly because of DiCaprio's performance.

A thrilling and eerie film that consists of a solid and grand twist. Shutter Island is a Martin Scorsese attempt in the realm of suspense and thrillers that seems to pay off in an obscure way. The strength-filled cast and vintage direction ultimately helps this picture from the minor faults it possessed. 4/5

Solid film. Once they start questioning things it pretty much is clear that is the way they are going to go. Overall solid acting from Dicaprio, Kingsley and Ruffalo.