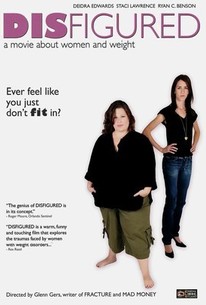 Two women who don't look at all alike find out they have an unfortunate amount in common in this independent comedy drama. Lydia (Deidra Edwards) is a woman in her early thirties who lives and works in Venice Beach, CA, a place where appearance counts for a lot. Lydia is more than a little overweight, and she's a member of a "Fat Acceptance Group," a support organization where plus-sized women gather to discuss their emotional issues and their desire for the world to understand them at face value. One day, a new face appears at the group's weekly meeting -- Darcy (Staci Lawrence), a strikingly slender woman who informs the regulars that she's a recovering anorexic who wants to attend because despite her size, she still sees herself as fat. While the leader of the group rejects Darcy, Lydia strikes up a friendship with her, and as they get to know one another they come to understand their unique anxieties about their bodies. Lydia has begun a tentative romance with a stocky but likable man named Bob (Ryan C. Benson), who wants a woman who won't judge him for his girth, but when she learns he's planning to have gastric bypass surgery in a final bid to lose weight, she's afraid he'll leave her behind and makes an unusual request to Darcy -- lessons in how to become anorexic. Disfigured was the first directorial assignment for screenwriter Glenn Gers.

Heather Brooker
as Judy
View All

A struggling anorexic and her physical opposite form an unlikely friendship in disFIGURED, a funny, awkward and often uncomfortable drama.

Like Crash for the heavyset crowd, Glenn Gers's disFIGURED is a preachy message movie that collapses under the weight of its own self-important speechifying.

Well worth seeing even if the execution is a little choppy, because the issues explored here really attain some excellent depth.

A novel buddy vehicle contrasting the unique perspectives of a two segments of society ordinarily either marginalized in movies or treated almost as if they didn't exist at all.

Out of control desires like sex, food and emotional neediness intertwine with their opposites of starvation, abstinence, denial, shame and self-hatred throughout this raw and revealing, intensely intimate drama.

The film canâ(TM)t do the arithmetic right to get to a solution on how to tell a straight story without a bunch of forced tangents and gnarly knots that take too much work to sift through.

A delightful and honest story, full of poignant and humorous moments, it speaks to the fat and the skinny person in all of us.

There are no featured audience reviews yet. Click the link below to see what others say about Disfigured!