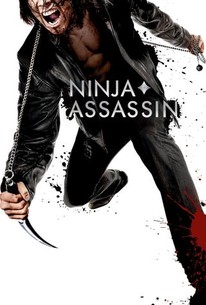 Critics Consensus: Overly serious and incomprehensibly edited, Ninja Assassin fails to live up to the promise of its title.

Critics Consensus: Overly serious and incomprehensibly edited, Ninja Assassin fails to live up to the promise of its title.

Critic Consensus: Overly serious and incomprehensibly edited, Ninja Assassin fails to live up to the promise of its title.

V for Vendetta director James McTeigue re-teams with that film's producers Larry and Andy Wachowski for this action-packed tale of a skilled assassin who was trained by a mythical secret society, and patiently awaits the day he will avenge the death of his best friend. Swept off the streets as a young boy, Raizo (Korean pop star Rain) is transformed into an unstoppable killing machine by a secret society known as the Ozunu Clan. The Ozunu Clan is so proficient at keeping their existence a secret that most people think they are only a myth, but the moment Ozuno assassins kill Raizo's friend, their days in the shadows are numbered. In the aftermath of that killing, Raizo stages a daring escape, subsequently biding his time until the day he can take the entire Ozunu Clan down. Later, in Berlin, Europol agent Mika Coretti (Naomie Harris) discovers a money trail connecting multiple political murders to a mysterious network of elusive assassins from the Far East. While her superior Ryan Maslow (Ben Miles) orders Mika to back down and stop asking questions, she stealthily begins searching through classified agency files on a relentless mission to discover the truth about the murders. Singled out as a target as a direct result of her investigation, Mika is marked for death by lethal Ozunu assassin Takeshi (Rick Yune). Just as Mika is about to be silenced forever, Raizo saves her from certain death. But Raizo knows that Takeshi and the rest of the Ozuno Clan won't stop until he and Mika are both dead. Now, as Raizo and Mika are hunted through the winding streets of Europe, their only hope for survival is to trust one another and stay alive long enough to bring the Ozunu empire crumbling to the ground. ~ Jason Buchanan, Rovi

Mina Ghousi
as Kid with Envelope

Johannes Ahn
as Medic
View All

Decent ingredients but, as a whole, this is lacking in choreographic flair and plot substance.

A garish and poorly filmed chop-socky frolic that makes about as much sense as an Escher painting viewed through Vaseline-smudged Ray-Bans.

Ninja Assassin is final proof that the once innovative Wachowski Brothers have indeed lost their creative mojo.

The fight scenes are uninspired and I suspect post-pubescent audiences will be very bored.

The fight scenes are mostly great. And Rain, so dashing in Speed Racer, is something to behold. His precisely rippled and defined body is awe-inspiring.

It truly wouldn't take much - a minor re-edit, a few arch looks to camera, a wiseacre sidekick named 'Shortballs' - to inch this utterly mystifying throwback into spoof territory.

Bloodthirsty doesn't even begin to describe the level of splattering carnage found throughout.

The film has all of the elements I want out of a ninja movie, which is basically a crap load of ninjas and an excessive amount of ninja fights. In this incarnation, apparently every time a ninja does pretty much anything, blood explodes.

Nothing more than an excuse for violent ninja fighting with a huge body count and plenty of blood - real and CGI.

Ninja Assassin re-opens the door to a genre that has either been absorbed into conventional action movies via pilfered fight choreography or completely forgotten as a viable, creative foundation for interesting stories.

An oddly boring film, considering there is Ninja action basically non-stop, incredibly nasty wounds and deaths (even though clearly CGI ones). The problem is that there is not much of a story, or the one that's presented leaves us little to care about. A great example of how plenty of gore and violence does not equal entertainment.

A ninja who has turned his back on his clan fights to defend an Interpol researcher who is trying to uncover them and seek revenge upon his erstwhile master. No-one has the right to complain about the lack of depth or characterisation in this film. It's called Ninja Assassin for christ's sake. Essentially it's a mish-mash of ideas that are just an excuse for wildly over the top action sequences in which bad guys are sliced, diced and eviscerated left, right and centre; it has the "gangsters fighting against an invisible assassin" format of the Predator films, the "come with me if you want to live" character dynamic of The Terminator and the soldiers vs afore-mentioned invisible assassins finale that's straight out of Aliens. But unlike Doomsday which managed to completely balls up this mix of "influences", Ninja Assassin sticks to what it knows and presents a non-stop frenetic gorefest that's actually a lot of fun. The result reminded me of a Wachowski-fied version of Blade that's a bit thin on plot but makes up for it with above par effects and finely executed action. In fact the bad guys are very much in the vein of The Hand from the Wolverine comics and I would have been a lot happier if the Wolverine film had been handled in a similar way. Switch brain to neutral and enjoy.

An interesting action flick with a throw back to all the ninja movies of the past. Awesome slick stylized fight scenes with lots of blood shed and tons of great ninja stuff. Automatic ninja stars for the win.