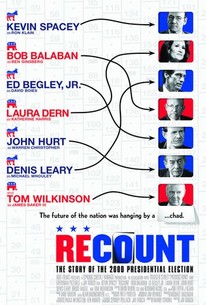 Critics Consensus: Recount deftly brings a controversial chapter of electoral history to dramatic life with a compelling cast, although some viewers may take issue with its conclusions.

Critics Consensus: Recount deftly brings a controversial chapter of electoral history to dramatic life with a compelling cast, although some viewers may take issue with its conclusions.

Critic Consensus: Recount deftly brings a controversial chapter of electoral history to dramatic life with a compelling cast, although some viewers may take issue with its conclusions.

Kevin Spacey and Bob Balaban headline Austin Powers director Jay Roach's all-star docudrama examining the events surrounding the most controversial presidential election in United States history. The highest office in the country is up for grabs, and the fate of the free world may hang in the balance. When the initial tallies from Florida voting polls prove inconclusive, the decision is made to hold a recount. But it's a controversial decision to say the least, and one that caused many skeptical voters to suspect foul play. Eventually the case would go all the way to the Supreme Court, and as the trial gets under way charismatic Texas republican James Baker (Tom Wilkinson) attempts to rally public support for the recount. But the Democrats aren't about to lie down and die just yet, because Al Gore's former chief of staff Ron Klain (Spacey) can play hardball with the best of the old elephants. Now, as these two opposing giants come to blows over the fate of the presidency, they gradually begin to develop a grudging respect for one another. Laura Dern, John Hurt, Dennis Leary, and Ed Begley, Jr. round out the cast for the film that blends actual news footage and verbatim dialogue into fictionalized recreations that are both highly entertaining and deeply dramatic.

Given its timeliness, "Recount" is a painful sort of fun, and likely a great argument starter.

The cable channel has taken a difficult, divisive topic and turned it into a clear, fast-moving thriller with comical overtones.

It's so suspenseful that it's easy to forget that you already know how it ends.

Even when the complicated political and legal machinations are handled gracefully, Recount doesn't have time to give these people depth or render their unique situations with sufficient shadings of complexity.

The tension that swirled around thousands of disputed Florida ballots after the November 2000 election was almost Shakespearean... Recount effectively dramatizes that struggle.

If you have the slightest interest in politics and movie treatments thereof, I recommend it.

...a matter-of-fact drama that's rarely as engrossing or captivating as one might've anticipated...

The movie isn't subtle... but it takes on a big subject and gives it a light spin.

This film does an honest and fair job of presenting the facts in as complete a picture as two hours could possibly allow.

Democracy relies on citizens having access to verified information about their lives, while such docudramas as Recount often provide the opposite - innuendo, rumor and outright fabrications.

There's no suspense about the outcome, but following the twisted, oftentimes maddening journey to that point is filled with tension and dark humor.

Credit must go to Recount's script, which manages to cover all of the bases without sacrificing wit and realism, and its acclaimed cast, who bring to life several infamous moments.

I was a bit reluctant for watching a movie that seemed to be based on election procedures, but having seen it, I don't regret taking the chances. Kevin Spacey is the main reason I decided to take the risk of being bored, but his performance isn't the major highlight of the film. The incredibly apt execution of such material is what made me see it through till the end. While not outstanding (in fact, a bit tedious at times), it's okay for a single viewing. Although not interested in political campaigns (or even politics in a broader sense for that matter), I found it quite watchable. Despite of the political ignorance, whether or not the film is biased is quite apparent. Its weak efforts to be impartial come off as an act of pretense. Of course, just my expert opinion!!!

The film is a good overview of the events that transpired in Florida between the 2000 election and the Supreme Court's decision in Bush v. Gore, but it lacked the depth I desired. It seems to me that dramatization is not the right way to approach covering the events--a documentary gets rid of the glitz and goes right down to the facts. The film also clearly took some dramatic licence to exaggerate some of the events, which compromised the objectivity of the film. Nevertheless, Spacey, Leary, Wilkinson, and Dern all turned in good performances, and the film was very enjoyable. It just wasn't the thorough learning experience I want and expect from historical dramatizations like this one.

"Recount" is one of the best films I have ever seen about Democracy in America. It's a fast paced and utterly engrossing portrayal of the 2000 Presidential election recounts in Florida. In retrospect the events depicted are a huge storm on the horizon of things to come and really eerie to watch. The acting is great from the large ensemble and the background info into the voting process and the law that goes along with it is fascinating. Factually accurate with a pinch of satire and a whole lot of social and historical commentary (past and present), "Recount" is a triumph. It should stand as one of the defining films about the Bush Administration and that time period.

"The future of the nation was hanging by a chad." A chronicle of the weeks after the 2000 U.S. presidential election and the subsequent recounts in Florida.

REVIEW
Jay Roach (the "Austin Power" series, "Meet the Parents") doesn't seem the right director for a political-driven movie about one of the most controversial elections ever, but he did a good job in charge of this well-executed HBO production. "Recount" features solid performances all around, particularly Kevin Spacey as Ron Klain (Al Gore's recount point man) and Tom Wilkinson as James Baker (Bush's top recount strategist); Laura Dern seemed to have fun playing the ridiculously clueless (and potentially malevolent) Katherine Harris (Florida's Secretary of State), the woman who stopped the recount. The movie works for being wittily unbiased (Spacey's outburst scene: "You know what's funny? I don't even know if I like Al Gore... I just wanna know who actually won this f***ing election!" is pivotal, and his last conversation with Wilkinson/Baker is also a great point) and informative for those who have short-term memory (or were too young 8 years ago). We all know how it's gonna end, and the movie doesn't have the pretension of answering eternal questions like "Who really won the election and would have Al Gore been a better president?" We'll most likely never know the first, and can just wonder about the second. For better or worse, things would've been different had Bush lost, that's for sure. It might not be a solace, but that's the only truth we have, and the makers of "Recount" seem to be aware of that.