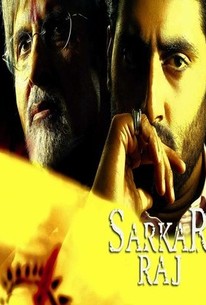 When Anita Rajan, CEO of Sheppard power plant, an International company, brings a power plant proposal to set up in rural Maharashtra before the Nagres, an insightful Shankar is quick to realize the benefits the power plant can bring to the people. After convincing Sarkar who is against it for various reasons, Shankar undertakes a journey along with Anita to the villages of Maharashtra to mobilize support of the masses. However, things are not what they seem to be, from shady fixers with an eye on multi-million kick-backs or wannabe Shankar's that are ready to incite millions of people against the highly controversial project in a state that is witnessing the worst of coalition politics. Shankar's dream project gradually becomes a political minefield and the evil forces mightier than ever mushroom and gang up to bring down the regime of Sarkar and obliterate Shankar's name from the political horizon.

The film does deliver some surprises, and that's why it's much better, and tauter, than the first. The intrigue is sharper. So is the acting.

Sixty-five-year-old Amitabh Bachchan, India's vibrant and virile living legend, is riveting in nearly every film he does. But even a true fan's ardor is tested by the tedious political thriller, Sarkar Raj.

Proves firmly that Bollywood can hold its own technically against its Western counterparts.

Sarkar delivers a long monologue at the end of the film that explains what really happened: chiefly that the power plant was just a ruse for a power struggle. Too bad Varma didn't make that film.

Ram Gopal Varma's... reworking of The Godfather... delivers the casting coup of Bollywood's royal family %u2013 Amitabh Bachhan, his son, Abhishek, and Abhishek's wife, Aishwarya Rai %u2013 ... [but] the result is overwrought and cliched.

This all-star concoction is as muddy as the Ganges and nowhere near as holy. Unless, of course, you're talking plot-holey.

There are no featured audience reviews yet. Click the link below to see what others say about Sarkar Raj!