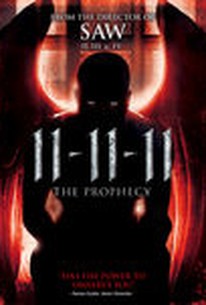 After the tragic death of his wife and child, famed American author Joseph Crone travels from the United States to Barcelona, Spain to reunite with his estranged brother Samuel and dying father, Richard. However, fate has a different plan for Joseph as his life becomes plagued with strange happenings, and the constant sightings of the number 11. Curiosity quickly turns to obsession, and Joseph soon realizes that this number holds a horrific meaning not only to himself but possibly to all of religion. Isolated in a foreign country with only the support of his companion, Sadie, Joseph soon realizes that 11/11/11 is more than just a date, it's a WARNING! -- (C) Epic Pictures

Angela Rosal
as Anna
View All

If the ineffectiveness knob goes up to ten, this film manages to turn it up to you-know-what.

If only "11-11-11" had arrived a little closer to Thanksgiving - the turkey connection would have been entirely appropriate.

The film has the feel of something conceived and whipped together in very little time, perhaps to make its own built-in deadline.

Despite a good lead performance and a few cool ideas, 11-11-11 is also packed with a lot of airy chit-chat that either repeats established ideas or simply goes nowhere.

With 11-11-11, Darren Lynn Bousman is merely insulting the audience with this poor excuse for a plot and its ludicrous ending

Jeff Beck
We Got This Covered

With "11-11-11," [Bousman] is merely insulting the audience with this poor excuse for a plot and its ludicrous ending.

tries to hammer home the point that something awful is coming - although the viewer is never quite sure what.

11-11-11 has a few scary moments here and there, but it's mostly a flat, lifeless spiritual horror spin on The Number 23.

While not as offensively tawdry as recent release The Devil Inside, Bousman's film is strictly by-the-numbers horror fare.

Now that 11/11/11 has passed without any doom, the movie is already obsolete.

There's been an annoying trend in horror lately involving characters rediscovering their faith. It's hammered home in this tale of an impending apocalypse and the conflict between an atheist and his Christian brother. The school of "flash/screech/bang" horror is where this one pitches it's tent. Directed by Darren Lynn Bousman who gave us Saw 2, 3, and 4, but the gore is eschewed here for a brooding atmosphere which he fails to pull off.