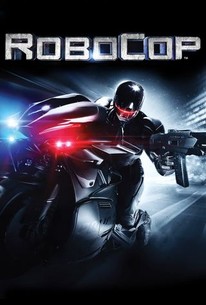 Critics Consensus: While it's far better than it could have been, José Padilha's RoboCop remake fails to offer a significant improvement over the original.

Critics Consensus: While it's far better than it could have been, José Padilha's RoboCop remake fails to offer a significant improvement over the original.

Critic Consensus: While it's far better than it could have been, José Padilha's RoboCop remake fails to offer a significant improvement over the original.

In RoboCop, the year is 2028 and multinational conglomerate OmniCorp is at the center of robot technology. Overseas, their drones have been used by the military for years - and it's meant billions for OmniCorp's bottom line. Now OmniCorp wants to bring their controversial technology to the home front, and they see a golden opportunity to do it. When Alex Murphy (Joel Kinnaman) - a loving husband, father and good cop doing his best to stem the tide of crime and corruption in Detroit - is critically injured in the line of duty, OmniCorp sees their chance to build a part-man, part-robot police officer. OmniCorp envisions a RoboCop in every city and even more billions for their shareholders, but they never counted on one thing: there is still a man inside the machine pursuing justice. (c) Sony

Rory O'Shea
as Cop at Armoury

[A]fter an opening sequence as promising as the one here, it needs at least an attempted follow-through, not the jumble of confused ideas and time-wasting effects that take up the bulk of the film.

Surveying the peculiar array of 1980s retreads clustered into release this week, I'm reminded of Marty McFly in Back to the Future Part II, traveling forward in time 30 years to discover that everything is still the same, only worse.

The Brazilian director José Padilha may be working for a Hollywood studio but he doesn't temper his critique of American imperialism, big business and political corruption.

Padilha is Brazilian, and it's interesting that both RoboCops have been made by men whose non-Hollywood work focused on their respective countries' curdled politics.

This Robo-reboot tries fiercely to update the satirical punch and stylistic perversity Paul Verhoeven's 1987 original. It's a futile gesture.

In director José Padilha's straight-shooting RoboCop remake, the future of law enforcement comes in a shiny black package that's complete with all the technological upgrades that $2 billion can buy.

It simply doesn't have the vulgar verve that Verhoeven brought to the original, but between the explosions and bullets it does tackle some big, timely questions about drone warfare and corporate responsibility.

Remaking a nearly flawless movie is a feat few filmmakers, if any, have ever accomplished.

Ends up being a far too timid remake.

The comparisons are inevitable but the remake is no masterpiece.

This new version of RoboCop is an entirely different animal, and that's just fine. Gone is the biting social satire...The social conscience is still there, but it's more subtle and more along the lines of commentary than all out satire.

The question of the necessity of a reboot aside, this isn't a bad attempt. The cast is great, the pace really fast and the effects pretty decent. The action is not particularly spectacular, and the bad guys die surprisingly bloodless, but the film is neither more shallow nor dumber than the original. Only the final scene leaves a bit of a stale taste in your mouth.

A well-made remake that is brave enough to be completely different from the original movie, and it is so great that it touches on intriguing questions about human nature without missing the opportunity to also discuss today's politics, despite lacking in energy and feeling.

In the olden days nobody gave too much of a hoot for sci-fi and so you had cheesy movies with 3 or 4 no-name actors carrying the whole thing, reciting the whole script. Nowadays, sci-fi is big money and so you have the opposite, and in this film you've got it in spades: practically the entire cast is a name talent, meaning everybody gets a line or two, but that's all, "don't be so greedy". This in service of a story with the money and tech to be really big, but because of the diffusion of talent, ya get diffusion of intent, diffusion of purpose and so an "ehh" where you should've got a "rrrrah!" Nonetheless, Jackie Earle Haley nearly walks away with the whole thing.