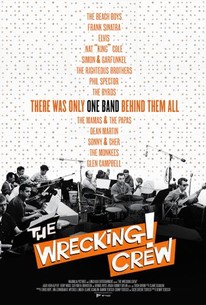 Critics Consensus: The Wrecking Crew may not achieve the greatness of the many classic songs its subjects helped bring to life, but it remains a heartfelt, overdue tribute to overshadowed brilliance.

Critics Consensus: The Wrecking Crew may not achieve the greatness of the many classic songs its subjects helped bring to life, but it remains a heartfelt, overdue tribute to overshadowed brilliance.

Critic Consensus: The Wrecking Crew may not achieve the greatness of the many classic songs its subjects helped bring to life, but it remains a heartfelt, overdue tribute to overshadowed brilliance.

What the Funk Brothers did for Motown...The Wrecking Crew did, only bigger, for the West Coast Sound. Six years in a row in the 1960's and early 1970's, the Grammy for "Record of the Year" went to Wrecking Crew recordings. And now, THE WRECKING CREW tells the story in pictures and that oh, so glorious sound. The favorite songs of a generation are all here, presented by the people who made them for you. THE WRECKING CREW is a documentary film produced and directed by Denny Tedesco, son of legendary late Wrecking Crew guitarist Tommy Tedesco. The film tells the story of the unsung musicians that provided the backbeat, the bottom and the swinging melody that drove many of the number one hits of the 1960's. It didn't matter if it was Nat "King" Cole, Frank Sinatra, Nancy Sinatra, The Monkees, The Byrds or The Beach Boys, these dedicated musicians brought the flair and musicianship that made the American "west coast sound" a dominant cultural force around the world. The film is a fun and moving tribute from Denny to his father and to the music, the times and to the secret star-making machine known only as "The Wrecking Crew". (C) Magnolia

Joe Osborn
as Bass
View All

Critic Reviews for The Wrecking Crew

The documentary makes fascinating connections between the fledgling high-showbiz days of rock 'n' roll and the rise of more versatile singer-songwriters in the 1970s.

It's a fascinating insight into how a classic song is crafted.

Tedesco nails the point: that the beauty of pop music lies not with the prancing pop starlets, but in the hands of the average-looking, insanely talented artists behind the scenes.

An entertaining and compelling story about music's unsung heroes.

It all feels more like an ambitious home video than a 'proper' film.

A must-see for liner-note readers.

For the sheer joy of the music...

In this fascinating, eclectic look at this musical period, The Wrecking Crew brings out the essential solidarity and practicality of the group.

A heartfelt and interesting peak into an unexplored part of our collective musical history and it has a good beat and you can dance to it.

What the director [Denny Tedesco] lacks in technical chops and narrative clarity, he more than makes up for in enthusiasm and heart, and that's what make The Wrecking Crew an exceptional documentary.

Requiem for a studio musician.

Tedesco doesn't shy from the harsh realities of the session player's life. However, this isn't an angry or bitter film by any means. The goal, almost to a fault, is to celebrate these musicians and the songs they created.

Audience Reviews for The Wrecking Crew

I streamed this music documentary after streaming Muscle Shoals. Comparatively I liked Muscle Shoals better, although fans of rock n' roll will find lots of fun behind the scenes information in this one too. These two rock docs have similar themes with unsung session musicians who played on tons of hit records finally getting the recognition they deserve. This doc has as its structure the living members of The Wrecking Crew sitting around a table sharing anecdotes. Therefore the overall film has less structure as the stories of recording with different artists jumps around with little rhyme or reason. Yes, the artists/bands that they backed might be even more well-known (more white musicians) than the ones featured in Muscle Shoals, but the interviews praising the skills of these instrumentalists, whose names would only be recognized if you really paid attention to all the liner notes and credits on your vinyl sleeves, just felt a little shallow and mashed together. Evidently this was made first, but then extra time was needed to clear the music rights, and it ended up being released a couple years later than the Muscle Shoals doc. Still a strong piece of rock n' roll non-fiction, but in my mind it came in second.

A strangely interesting documentary with a poignant twist, particularly for fans of the music therein (and who isn't?): As you discover that your favorite entertainers did NOT perform the intricate melodies that we were lead to believe that they did, we also are introduced to those, invisible behind the Wizard's curtain, who did. Dick Clark, greasy middleman of rock, opines that it doesn't matter and yet ... why was the lie told? Must see.

A fascinating documentary - especially for those who love music - that surprises us as we see that so many of those well-known songs were arranged by a group of people that the public had never heard about, and it is all the more absorbing when showing how hard it can be to have your work recognized in the music industry.

ALL ABOUT THAT BASS - My Review of THE WRECKING CREW (4 Stars) Whether you grew up in the 60s/70s or if you're a fan of the classic music from that period, it's likely you'll treasure Denny Tedesco's loving, passionate, bittersweet documentary about the unsung heroes behind such recordings as "California Dreaming", "You've Lost That Lovin' Feelng", and "Be My Baby". Somewhat of a cousin to the Oscar-winning, "20 Feet From Stardom", Tedesco has been making this film since 1996 as a tribute to his late father, Tommy Tedesco, a guitarist with the group of West Coast session musicians who played on a jaw-dropping number of rock hits, movie and tv themes. Finally getting their due, the musicians reveal that they, and not the original members of such bands as The Beach Boys, did the lion's share of the playing. The list of songs is staggering and I spent most of my time viewing the film with my jaw decisively dropped and my toes tapping. More important than uncovering these music industry secrets, however, is the true passion for music on display here. These are musicians who loved to play, to discuss it, and in one extremely potent moment, Tommy says to his reunited group, "They put notes on paper. That's not music. You make the music". ...And what incredible music it is. The film dives in and out of the lives of some key players, interweaving a reunion roundtable with rare footage from the era and vibrant photos. I loved watching a very young Sonny and Cher make their way around the studios, these newbies facing a group of old pros. Brian Wilson looked truly inspired to record with the Crew, who unanimously loved working with this genius. Tommy is a great main character. He's energetic and hilarious in footage where he's talking to students or reminiscing with his old pals. Drummer Hal Blaine carries a lot of the pathos in the film with a heartbreaking riches to rags story. A couple of the members broke out into solo stardom, chief among them, Glen Campbell and Leon Russell. The lone female in the group, Carol Kaye, steals every moment she's on screen. Clearly a warm person who suffers no fools, she never once played the victim, assimilating herself into this boy's club because of her undisputed talent as a bass player. A highlight of the film is watching Carol show us the original, too-spare bass line to "The Beat Goes On" and then demonstrating how she added her own touches to make it unforgettable. Every so often we'll hear a musician play, for example, "The Pink Panther Theme" and then Tedesco will lay the finished track on top of that footage. It's a terrific way to show us their artistry and bring these invisible talents front and center with the songs that shaped so many lives. This isn't a perfect film, but it's a perfect experience. At times, the storytelling can duck down a few too many corridors, but it's an extremely minor complaint. The shaggy style constantly brings us gem after gem of music and lively reminiscences. Imagine turning a radio dial over and over and only hearing masterpieces and that describes the viewing pleasure of this film. The journey to get this film released has been arduous. I met Denny back in the 80s as we both worked in film production. Years later, he started talking about a documentary he was making to honor his father who was starting to get ill. Tommy, and many others, did not live to see the final product, which, after a successful film festival run, has been held up for years dues to music rights. We see many people who are either gone (Dick Clark is among them) or have mentally slipped away (Campbell), making this film that much more essential as a time capsule. There were times, however, that it looked like this film would never get the proper release it so richly deserves. But Tedesco persevered, raised the hundred of thousands of dollars needed to pay off the endless list of musicians, and 19 years later we have THE WRECKING CREW. His passion to tell this story about a group of very passionate people was well worth the wait and is a glorious homage to REAL talent.