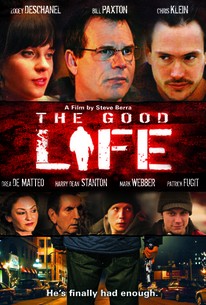 Mette Beckmann was the wife of Valdemar Beckmann, the son of a wealthy Danish family who owned a successful shipbuilding firm in Portugal; Valdemar inherited his family's fortune, and Mette lived a life of luxury from that point on, while their daughter, Anne Mette Beckmann, grew up free of want. The Beckmanns spent most of their time in Portugal, where Valdemar lackadaisically looked after the family business, but in 1974 the Portuguese government nationalized his business, and the Beckmann fortune was suddenly wiped out. In 2007, Valdemar died, and since then Mette and Anne have lived in a tiny apartment on the Portuguese coast, trying to get by on a small pension and simmering with resentment for one another. Middle-aged Anne is angry that her mother and father never taught her how to make a life for herself, and elderly Mette is bitter that the life of privilege she once knew is gone forever, and concerned about what will become of her daughter. Filmmaker Eva Mulvad profiles a family struggling to get by after decades free of responsibility in the documentary Det Gode Liv (aka The Good Life), which features home movies of the Beckmanns in their salad days along with extensive interviews with Mette and Anne as they struggle to make ends meet. The film received its North American premiere at the 2011 Tribeca Film Festival. ~ Mark Deming, Rovi

Deborah Rush
as Diane
View All

Critic Reviews for The Good Life

While The Good Life is stylistically ambitious and heartfelt, it feels more forced than authentic.

As a director, Stephen Berra makes this all quite palatable, but as a writer, he frequently mistakes platitudes for profundity.

You just can't go from darkly morose to uplifting and hopeful in the last 30 seconds of the film without any kind of arc to take you there.

Grounded in the rich cinematic tradition of Small-Town America, the film doesn't break much new thematic ground, but it's well-acted by the entire ensemble, which consists of both pros and young thespians.

The film spends what seems like interminable hours driving home the brutal truth that the world is better off without Jason Prayer, and, despite the anemic flip-flop of the last twenty seconds, it's hard to disagree.

Audience Reviews for The Good Life

Dark, but good. Really interesting movie and keeps you on your toes and thinking. I love Deschanel in her role... I swear she can pull off anything.

ZOOEY Deschannel is really opening my eyes as a talented actress...one look in those eyes of honesty of hers holds me captivated as she goes through the script she held in this epic of a movie...being trapped in her life she found the perfect escape through the befriending and relating with Patric Fugit. This was a good soul searching drama the holds you and surprises you in the very end.

A bit outside the norm here, this one makes you really think about what is and what could be. A great little plot twist that makes the movie towards the end. The end to me was left kinda open I had been watching movies for about 8 hours recovering from New Years Eve so I may have missed something.