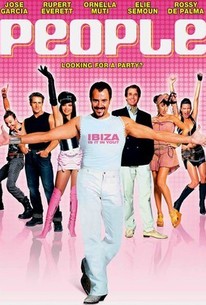 Jet Set writer/director Fabien Onteniente returns to craft this sequel set against the backdrop of hedonistic Ibiza, and starring Rupert Everett as a Parisian party planner whose career has been sabotaged by a jealous rival. If you want your party to pop, you call on Charles (Everett). Charles has a knack for throwing the wildest parties in around, and his reputation is legendary. But Charles also has his fair share of enemies, and when a dastardly competitor schemes to turn Europe's hottest party planner into a hopeless has been he makes way for Ibiza in search of local club king John John (Jose Garcia). Perhaps with a little help from the flamboyant entertainer who helped put Ibiza on the map, Charles can restore his reputation and finally get back to doing what he does best - keep the crowds dancing till the break of dawn! ~ Jason Buchanan, Rovi

Full of outrageous but entertaining ideas, the film has irresistible charm, despite its kooky story

There are no featured reviews for People at this time.