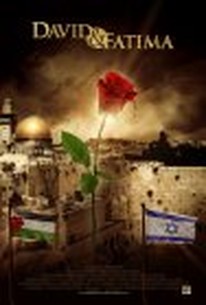 A forbidden romance threatens deadly consequences for a young Israeli Jew and a beautiful Palestinian Muslim who risk their lives and defy their families by eloping in a land where their union will be doomed from the moment they wed. Jerusalem is in crisis; while Jews, Arabs, and Christians live side by side in this sacred city, few of them ever intermingle, much less attempt to pursue any kind of meaningful dialogue with one another. Tradition runs deep here, and to go against that could mean death. But for a young Jew named David and a pretty Palestinian named Fatima, the world simply isn't as black and white as some folks would like to think. They know that they must work to keep their romance a secret from their families, and when the truth gets out their love is at risk of being lost forever. But David and Fatima are willing to risk it all in the name of love, and soon make the decision to elope rather than let their lives be dictated by the laws of the land. Neither has any doubt that their decision could bring about deadly results, but both realize that a love this strong is simply much too powerful to ever be denied.

There are no critic reviews yet for David & Fatima. Keep checking Rotten Tomatoes for updates!

There are no featured audience reviews yet. Click the link below to see what others say about David & Fatima!