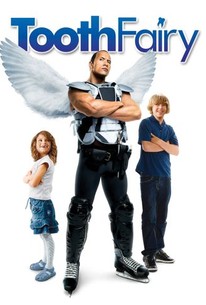 Critics Consensus: Dwayne Johnson brings the full force of his charm (and his appropriately pale chompers) to the title role, but flat direction and a committee-written script render The Tooth Fairy unacceptably dull.

Critics Consensus: Dwayne Johnson brings the full force of his charm (and his appropriately pale chompers) to the title role, but flat direction and a committee-written script render The Tooth Fairy unacceptably dull.

Critic Consensus: Dwayne Johnson brings the full force of his charm (and his appropriately pale chompers) to the title role, but flat direction and a committee-written script render The Tooth Fairy unacceptably dull.

Steve Levy
as Himself

John Kirincich
as Ref for Game #3

Critic Reviews for The Tooth Fairy

So, for adults, the best that can be said for Tooth Fairy is that it's funnier than the awful trailer.

It has a terrible screenplay and you get the feeling that Johnson could be a much better light comedian than this, given a better chance.

Although the film gets over the preposterousness of its own premise early enough, the tooth/truth puns are exhausted to a fault, assumedly aimed at giving adults something to titter at.

It has the plastic, disinfected aroma of something straight off the assembly line.

The one element that lifts this above utter tedium is the presence of Stephen Merchant as tooth-fairy administrator Tracy. That he manages to come away with his dignity intact is testament to his skill as a comedian.

These films are all about sticking to a generic template, one in which a generally decent guy does a lot of bad things and must then redeem himself.

This is one film where families, especially those with small children, should ignore the critics and simply give in to the silliness of it all.

This is an obvious labor of love for the filmmakers and their collective eye for capturing the beauty, grace and, often, humor of their many dances (with Dom and Fiona) with geometric precision....

For what it is, Tooth Fairy is probably a success; it's not particularly smart or original but it doesn't care to be. That doesn't offer much hope to anyone else.

To call Tooth Fairy a bad film is like calling star Dwayne Johnson a big guy. Both statements are accurate, but neither actually conveys the degree to which they are true.

This comedy is essentially a goofy premise with some nutty dialog and set pieces pasted onto it. But it's watchably entertaining, even though the filmmakers miss almost every opportunity for sublime absurdity.

Rich Cline
Shadows on the Wall
View All Critic Reviews (116)

Audience Reviews for The Tooth Fairy

Im starting to think that if Dwayne Johnson wants to be taken seriously as a hollywood actor that he should probably stay away from these kid movies. Yes this is a cute and amsusing movie as was The Game Plan but they truly are children movies. Good cast,slightly amusing but its not that great!

'Feeling good' kind of movie with some heart-breaking scenes that encourage us to not stop dreaming and believing. They are good! Dwayne Johnson is marvelous in this funny movie. A movie that should be watch by anyone who stop believing in dreams.

There's one reason I had much interest in seeing this to begin with: The Rock is in it, and I'd thoroughly enjoyed every movie I'd seen him in. I still had to think about it, because the trailers made it seem so childish and silly, from what I remembered. As I often do with films (and other things in life in general), I found out I was wrong. This movie has several parts that'll make you laugh, and it has what most films of this type also have: good moral lessons to be reminded of, and inspiring parts (like when The Rock makes up with the family and when he scores his first goal in 9 seasons). So it's really nothing new, but I'm a fool for feel-good movies and drama films that work, which this one does. The streak of Dwayne Johnson films I like continues...and don't judge the film or make assumptions of what you'd think of it before you see it!

Good fun movie. My daughter laughed a lot and had a blast. the Rock has quietly put himself into a stereotype roll now. This a fun feel good movie made for the younger generation.