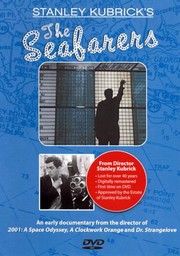 Matt C
February 26, 2016
One for Kubrick completist nerds like me only. This is really dull, even at only half an hours running time. Something about the US Navy or something, or their Trade Union or something...honestly, it's really dull.

Timm S
½ July 21, 2015
Hehehe..What A Perfect Little Utopia..Back In The Day When Lunches Were Long, Unions Looked Up To & Life Had Promise...Before Thatcherism, Reganomics & The Free-Market Came Into The Fore, Leaving The Guys In This Doco..Aka 'Howard's Battlers' , To Fend For Themselves..As 'Choice' & Individualism Is The New Flavour Of The Day.

Matthew D
½ May 4, 2015
For a documentary that starts with the power of the sea on man's mind, it is very dry. Kubrick slips in personal touches where he can, but his hand is clearly guided by the dictates of the Seafarers Union, who commissioned this promotion.

Graeme H
September 4, 2013
Kubrick's first colour feature and most distinguished documentary. Its subject is dated but works for its time. However, like Flying Padre, the film has very few Kubrick signatures. Its production is to par with the subsequent Fear and Desire if its makers' aesthetics are not.

Ken S
May 9, 2012
Again, I watched these early short documentaries by Kubrick purely because my interest was peaked. None of them are really all that interesting, and it is hard to say you can even see some spark of skill that would be so revered in Kubrick's career. This last short is the longest, instead of being less than 10 minutes it is a whole half hour. It feels like the kind of terrible educational film that might end up on Mystery Science Theater, with only a voice-over and footage of the Seafarer's Union, who is quite happily praised (since they paid for it). I think big Kubrick fans might be interested to see his first forays into film, but they aren't terribly interesting and I don't think they even show too much artistic skill.

Lucas B
½ July 31, 2011
I bought this film simply for Kubrick's name. It was an instinctive decision; Of course, this could be deemed bias as well, but I definitely know there have been myriad better films in his credentials that would follow on from this. However here, he was toying with a lot of different things... The short movie is based on the welfare of the Seafarers, and what they can do for people. The narrator says that they're stalwart sailers, who work early and finish late, helping people with supplies (bear in mind this is 1953). It's fundamentally a commercialized movie; however Kubrick gives it real flourishes. If you notice in the cafeteria, when he uses a steady dolly shot into the place, which is shoestringed with the commentary of Don Hollenbeck talking about them and their contributions. You'll notice on the cover that it bares a great similarity to "2001: A Space Odyssey"... However, none of these hold water for the film. Kubrick's direction is the most lively thing surrounding it, but the content falls flat. It's boring and rather numb; but Kubrick had to start off somewhere, and this is a film for forthcoming students or film makers around in their hopes and aspirations of venturing into a medium such as Kubrick's, and all the support you can get Another thing about the film is that not only does it include a chess scene, but it also includes a lot of closeups of some of the people Kubrick films around the organization; it's so interesting as it evokes references to latter work. It's filmed on color without the Technicolor's impeccable pallet, which I think disheartened Kubrick about using the color format, as you'll notice (except for his Hollywood production "Spartacus") from "Fear and Desire" (1953) right up to "Dr Strangelove" (1964), and I think that was best until he could use it with great panache again; the film here is acetate and has a lot of nitrage in it, showing the films age ultimately. I still think, though it's harsh to really disparage Kubrick's film debut, but that it was superior to "Fear and Desire" and that I'm quite shocked he wanted this to be shoved under the rug. It would be good if this independent copy would be added as a bonus feature in one of his movies, as I don't think one film gives you sufficient pleasure at viewing it, so in essence, this is really for true devotees of Kubrick (such as myself). DVD: It has commentary from Roger Avary and Keith Gordon giving it a buyer's interest, as they elaborate on what they think about the man and how they compare it to the film itself. There's also a brief interview with Katharina Kubrick divulging about her Fathers long and enduring career as one of the big titans of cinema. But my final thoughts are that the film falls under a marketing strategy, and that it was a short route into Kubrick's subsequent career, and that it's a real Film Buff's incentive to get it regarding that. However I think the prices for the movie could be reduced... However it was joyous to have it, and I prefer to watch it with commentary. So with that I recommend it to hardcore fans, but not to the casual fans.

Graeme H
July 3, 2011
Kubrick's first colour feature and most distinguished documentary. Its subject is dated but works for its time. However, like Flying Padre, the film has very few Kubrick signatures. Its production is to par with the subsequent Fear and Desire, even if its makers' aesthetics are not.

Caleb C
May 18, 2011
As one reviewer would say "For those who must have in their collection every film Kubrick made" . I think this would be the only reason for me to ever obtain this film at some point or another. Otherwise, this is mostly a pretty boring piece of work, but works very well with the narrative and contains a speech with interesting images of reactions from a crowd. Not much else is to be said about this documented short film about the S.I.U. I can't say that this would be of any interest to anyone unless they are a huge Kubrick fan or maybe even someone who is interested in joining the S.I.U, but I am sure that by now there are better films about this lying around somewhere. Either way, this is a must for any Kubrick fan to view at least once and of course add it to their film collection for show.

Pandy 3
½ December 10, 2010
Kubrick's third and final short documentary is all about offering information regarding the development and organization of the Seafarers International Union.

This one is in color but in comparison to the previous documentaries it has the slowest pace and the least interest, unless one can relate to its subject. Even the narration is dull, and probably the best thing about it is the shots of ships and the appearance of "Kubrick's dolly shot."

A nice documentary but definitely not for all, including myself ;)

peter h
½ October 25, 2010
STANLEY KUBRICK'S THE SEAFARERS: After the legendry director had made his very first feature length film FEAR AND DESIRE (1953), Stanley Kubrick was in needed to recoup costs so he made this short industrial film for the Seafarers International Union , the result was the directors very first colour film and his fourth film. Kubrick had prior to THE SEAFARERS had made two other short films (DAY OF THE FIGHT and FLYING PARADE) and one feature length film. In this quick review I give my thoughts on this short industrial film by one of my all time favourite directors, the great Stanley Kubrick.

Now prior to this film I have seen a fare few industrial films (like the ones lampooned on MST3K) and all of Stanley Kubrick's films from PATHS OF GLORY to FULL METAL JACKET (as of this review) , with this film I didn't expect much (due to the obvious reason it's an industrial film). My gut feeling wasn't that far off, this film is just another dull industrial film that promotes the subject matter in a positive light. But with the opening credits reading "directed and Photographed by Stanley Kubrick" that whole industrial film air was slightly shaken off. To be honest I was paying more attention to the direction and camera movement in this film rather than the subject matter (the seafarers' union). Instead of reviewing the dull subject matter and narration I'm only going to review Kubrick's direction.


Kubrick shows off his usual direction style, the graceful camera movement, a good use of the dolly, and sweeping camera pans. Kubrick blends his photographer's skill of capturing everyday life in this film while experimenting with the tool he was destined for, the move camera.


Final thoughts and recommendation on Kubrick's THE SEAFARERS: I don't hold Kubrick personally responsible for this dull colour mess; the narrator sucks all life out of the picture. In my view this film Kubrick was experimenting with a new medium of cinema photography which would make his later future films so stunning, Technicolor film. Recommendation: unless you are a diehard Kubrick fan and have seen a few industrial from the era (preferably the industrial shorts made fun on MST3K) I would recommended if you were going to view this short don't expect too much. Rating 70% (only due to it being a Kubrick short)

Evan H
½ April 21, 2010
I'm not enough of a Kubrick nerd to see anything special about this union publicity film. There might have been a few subtle instances where an image might have contradicted the VOG, but really, it doesn't make it worth it.

Kenneth S
July 20, 2009
THE SEAFARERS is a short documentary about the Seafarers International Union. Kubrick's first colour film is nothing more that a bore-fest galore. It is a decently made documentary, but there's just nothing in it that holds the viewer's interest. I mean, how exciting can you make a bunch of sailors hanging around in their natural environment?

Stefan Y
December 17, 2008
[FONT=Arial]
I was entertained with this long awaited DVD documentary. Glad to see it finally out there. After watching this industrial documentary one time I watched it again with the voice-over from directors Roger Avary and Keith Gordon (Dexter), very good indeed.

Indian Relay did a good job with the artwork, the DVD menus and the added features were actually pretty good. Considering you might already think you've seen everything as far as added Kubrick features, assuming you're a big fan of Stanley Kubrick, these were above average. There's also an interview with his daughter.

Dustin G
October 4, 2008
Well made doc about the SIU. Not much to say about it, it was probably a recruiting video made back in the day. I have no interest in the subject matter, and therefore found it pretty boring and uninteresting, but I'd watch a doc about a blade of grass growing in a field or paint drying on a wall if Stanley Kubrick directed it.
Page 1 of 1