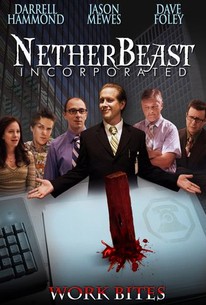 The familiar vampire legend gets a quirky twist in this take of undead office politics set in contemporary corporate America. For more than a century, Berm-Tech Industries has been run entirely by vampires. Though the tight-lipped employees have successfully managed to keep this secret from coming to light for the past 100 years, everything changed when the head bloodsucker contracts a deadly disease and makes the decision to begin hiring mortals. As the newest employees at Bern-Tech Industries discover that their new colleagues aren't exactly what they appear to be, nervous new hire Otto is charged with rewriting the initiative that earned the previous author an untimely stake through the heart. Darrell Hammond, Judd Nelson, and Jason Mewes star in a film featuring Robert Wagner as President James Garfield. ~ Jason Buchanan, Rovi

Spins an alluring love story with biting humor and offbeat scripting - and it does so with limited resources and few bankable stars.

...generally feels as though its been unnaturally padded-out to fill a feature-length running time...

A recognizable cast and what sounds like a good idea ... vampires as corporate fodder ... defanged with a lackluster script that's maybe too ironic for its own good, like a shark movie too wannabe cool for even one lawyer joke. Alas.

I was BEYOND DISAPPOINTED with this flick. Considering the talent and idea, this should be a killer satire with juicy horror bits, but it's just lukewarm type B cinema. The script is too prententious in terms of its details to the vampire/netherbeast history and then too skimpy on character development and meaty dialogue. This script tries to do some much, that done right would make this a classic, but it misses the mark for basically the length of the film and utterly wastes the talents of living comedy gods. Just watch the "trailer" here on flixster. It has everything you want to see and also conveys how annoying and lame this movie is. I get what the film-makers were going for here, but truth is that so many have done it better and with far less talented actors. I basically blame the writer(s) on the terribleness in this one.

A very well written, and almost ingenious way of taking the whole Vampire mythos and throwing it into a corporate setting. Netherbeast Incorporated is basically The Office except with flesh eating immortals. The movie has a really good collection of great character actors, and Darrell Hammond was piss your pants, laugh out loud hilarious.