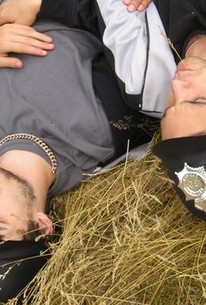 Critics Consensus: Bigga Than Ben is offensive and maybe slightly misogynistic, but still a provocative and crass slice of immigrant life in London.

Critics Consensus: Bigga Than Ben is offensive and maybe slightly misogynistic, but still a provocative and crass slice of immigrant life in London.

Critic Consensus: Bigga Than Ben is offensive and maybe slightly misogynistic, but still a provocative and crass slice of immigrant life in London.

Two aimless but good-natured Moscow youths attempt to avoid military service by traveling to London, only to find that life in the United Kingdom capitol isn't so easy when you're a flat-broke illegal immigrant. Cobakka (Ben Barnes) and Spiker (Andrei Chadov) are confident that they will find success in the shadow of Big Ben, so they leave their hometown of Moscow behind in order to pursue their dreams of success in a foreign land. But while Cobakka and Spiker may not be born criminals, they aren't above pulling off a scam or two in order to make a buck. Upon arriving in London, this pair of likeable rogues repeatedly finds that in a dog-eat-dog world, they are usually the ones served up on a silver platter. The rules of the game are much different in London than they were back in Moscow, yet despite their most sincere efforts to get with the program, Cobakka and Spiker always seem to wind up two steps backward for each stride ahead.

Jeff Mirza
as Dennis
View All

Critic Reviews for Bigga than Ben

Bigga Than Ben is small-scale, episodic and not without its sins of omission. But it looks as if it speaks the truth and is considerably more entertaining and thought-provoking than most of the week's other offerings.

Still, it's an enterprising little movie in its location shooting, and I warmed to it - an overeagerness to entertain is hardly the worst crime.

It's a depressing, grubby-looking little film with an undercurrent of particularly mean-spirited misogyny. You wonder what Suzie Halewood, the director, was thinking.

The performances are spiky, the use of varied locations is fresh and the dialogue - 'How could I ever imagine that I, a Moscow hooligan and Nazi would become a negro lover?' - is warmingly non-exemplary.

This lively comedy feels like about half a movie, as the inventive Borat-like hilarity runs out of steam after about an hour

It tails off into a confusing ending, but Bigga Than Ben is still honest, funny and provocative enough to wind up Daily Mail and Guardian readers alike.

Where she's less sure is the disintegration of the friendship between Spiker and Cobakka. It's less than convincing and strangely unaffecting because - to be brutally honest - they're both a pair of neo-Nazi gits.

What purports to be a rough guide, slyly but skilfully reveals itself to be a bit of a rough diamond.

Audience Reviews for Bigga than Ben

There are no featured audience reviews yet. Click the link below to see what others say about Bigga than Ben!