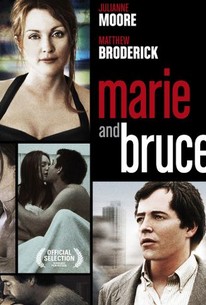 Tom Cairns directs the psychological comedy drama Marie and Bruce, adapted from the play by Wallace Shawn. Set over a period of 24 hours, the black comedy involves the troubled marriage of neurotic New Yorkers Marie (Julianne Moore) and Bruce (Matthew Broderick). What follows is a bleak psychological study of the breakdown of a modern relationship. Also starring Griffin Dunne and Campbell Scott. Musical score by Mark de Gli Antoni of Soul Coughing. Marie and Bruce was shown at the Sundance Film Festival in 2004. ~ Andrea LeVasseur, Rovi

Critic Reviews for Marie and Bruce

I'd rather just book another dinner with Andre then spend another day with Marie and Bruce.

Audience Reviews for Marie and Bruce

Bob Balaban, God bless him, has probably the best character in the entire movie because I can't imagine anyone lasting long enough watching the movie to see him (which would take approx. 15 minutes).