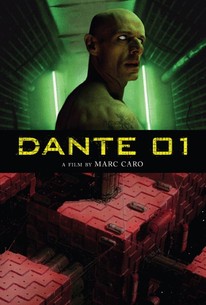 Delicatessen and City of Lost Children co-director Marc Caro makes his solo directorial debut with this nightmarish tale of a deep space prison and the newly arrived inmate suffering from a mysterious alien infection. Dante 01 is a maximum-security penitentiary located at the edge of the galaxy. Upon arriving at Dante 01 for psychiatric evaluation, the sole survivor of a horrifying alien encounter finds himself in the middle of a battle to harness his strange new powers. But the volatile force that now dwells within Saint Georges is greater than anyone realizes, and as it begins to infect both his jailers and fellow inmates alike the entire facility is soon swallowed up in violent rebellion. ~ Jason Buchanan, Rovi

"Dante 01" is a lot of things. It is a science fiction movie, a horror film, a Christ story, and a futuristic retelling of a classic myth, among others. Dark, gloomy, and atmospheric, it has a superb feel and aesthetic that is mostly equaled by the story.

Dante 01 isn't science fiction, it's just allegory with technology. The symbols are all on the surface...

Reeks of something written by a self-important first-year philosophy student . . .

...best described as The Green Mile meets Solaris on the set of Alien Resurrection.

If you like your SF challenging, bleak and unapologetically theosophical, Dante 01 offers a vision of hell that you may well find heavenly.

An enigmatic stranger is introduced into the population of a space station containing a collection of the criminally insane being used as guinea pigs for experimental treatments. Being directed as it was by one half of the team responsible for Delicatessen and The City Of Lost Children, Dante 01 is as visually pleasing as you'd expect. There is some beautiful imagery and use of colour and the premise intriguing in a kind of cross between Solaris and The Experiment. The script is packed with references to religion and classic literature to the point where I think you may need a PhD in philosophy to have the slightest clue what the film is actually about as little is explained and the conclusion is one of those Manga style existential spectacles that are utterly baffling to the uninitiated. The strong performances and attractive styling will keep the attention of those not too troubled by the lack of coherent narrative but anyone requiring a plot that's easy to follow and self explanatory will find it frustratingly pretentious. A genuine oddity that's worth a look for anyone seeking something a little different to the usual formulaic sci-fi.

This film is from the 2008 Screamfest Festival. Not as good as some of the other movies show at this festival, matter of fact it was way out there. Its put out by Dimension Extreme, so I knew I was in for something wild. About a prison in space where a new inmate is sent with what appears to be healing powers and can bring the dead back to life. Nothing scary about this one more in line with sci fi. 3 1/2 stars

A very strange mixture of sci-fi and thriller with some religious allegory thrown in. Some of it doesn't make any sense (to me) but so much of it does and I enjoyed the trademark look that Caro brings over from previous efforts that he made with co-director Jean-Pierre Jeunet. Alot apparently are turned off by it's vagueness and religious overtones but I wasn't one of them and look forward to seeing it again to determine if I can possibly understand it any better.

Marc Caro made some amazing films when paired with Jean-Pierre Jeunet. This is his first film in 10 years and it's a huge disappointment. What starts off as an intriguing idea soon spirals into madness, cheapness and poor film making. The religious symbolism soon becomes a mallet which is smacked over our heads. The nice set design soon loses it's appeal. Overall Event Horizon and Alien 3 have dealt with similar themes in a much more sophisticated manner. Many things go unexplained and other plot points are utterly ridiculous. Finally the ending has a few shots played continuously on a loop, getting faster and faster, for around 3 minutes. It's bearable, but not essential.