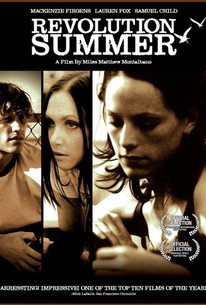 Three young people try to make their way through a world in crisis in this independent drama. Hope (Mackenzie Firgens) is a twenty-something woman trying to find an outlet for her political idealism and desire to change the world in the midst of the political crisis of the war in Iraq. Hope also wants to find like-minded people, as her best friend Francine (Lauren Fox) spends much of her time trying to distance herself from reality with sex, drugs and decadence. Hope thinks she may have found a soul mate when she meets Frankie (Samuel Child), a political activist who wants to take an active role in changing the world around him. Hope joins Frankie in his bid to upend the status quo through direct action, but his plans soon take her deeper into the underground than she expected. Featuring an original score by acclaimed singer and songwriter Jonathan Richman, Revolution Summer received its world premiere at the 2007 San Francisco International Film Festival.

As a disputation on the merits of armed revolution versus living one's life in peace and privacy, the movie has little to offer but the obvious. But as an evocation of a mood and a moment, there's something going on here.

There are no featured audience reviews yet. Click the link below to see what others say about Revolution Summer!