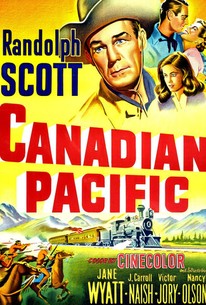 Filmed on location in the Canadian Rockies, this historical adventure spins a fanciful account of the building of the Canadian Pacific railroad. Randolph Scott heads the cast as Tom Andrews, a rough-and-ready surveyor who meets and conquers all obstacles in the railroad's path. The biggest fly in the ointment is trapper Dirk Rourke (Victor Jory), who perceives the Canadian Pacific as a threat to his livelihood. Rourke foments an Indian uprising which very nearly destroys the railroad. But Andrews and his hardy band persevere. Jane Wyatt plays the heroine among more intelligent and self-reliant lines than is usual in films of this nature. Highly suspect on a historical level, Canadian Pacific is nonetheless an exciting piece of filmmaking, evocatively photographed in Cinecolor by Fred Jackman Jr.

Howard Negley
as Mallis
View All

This so-called outdoor action picture very quickly and wearily settles down to trickling along in the old bed of cowboy-and-Indian films.

Tells an inaccurate story of the building of the Canadian Pacific railroad.

There are no featured reviews for Canadian Pacific at this time.