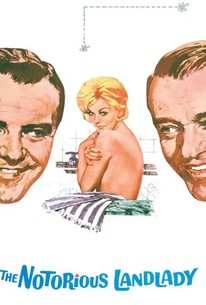 This uneven farce by director Richard Quine has its hilarious and witty moments as American diplomat William Gridley (Jack Lemmon) inadvertently gets caught up in a jewel theft and mayhem. After William lands in London to take up his new position and get settled in his new digs, he becomes involved with his gorgeous landlady Carlye Hardwicke (Kim Novak). Carlye's husband is missing, and she is suspected of doing him in. But then he unexpectedly comes back home where an argument with Carlye over some jewels makes him as dead as everyone had assumed -- with her wielding the murder weapon. Carlye is eventually acquitted thanks to a witness who has designs on the jewels herself -- but the story is far from over. First there is an exciting helicopter ride and a wild chase to decide just who will end up with the loot.

Betty Fairfax
as Woman in Bathrobe

Eric Micklewood
as Man with a Hangover

Critic Reviews for The Notorious Landlady

Poor Fred Astaire comes off the worst of all -- he's stuck as a fawning American embassy chief.

Audience Reviews for The Notorious Landlady

Excellent cast in silly trifle of a film. The tone of the film is all over the place, first romantic comedy than suspense finally slapstick. Fred is a most welcome presence in his brief scenes.