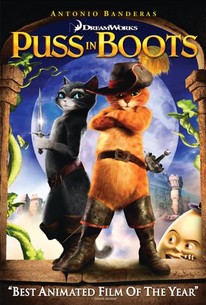 Critics Consensus: It isn't deep or groundbreaking, but what it lacks in profundity, Puss in Boots more than makes up for with an abundance of wit, visual sparkle, and effervescent charm.

Critics Consensus: It isn't deep or groundbreaking, but what it lacks in profundity, Puss in Boots more than makes up for with an abundance of wit, visual sparkle, and effervescent charm.

Critic Consensus: It isn't deep or groundbreaking, but what it lacks in profundity, Puss in Boots more than makes up for with an abundance of wit, visual sparkle, and effervescent charm.

Long before he even met Shrek, the notorious fighter, lover and outlaw Puss in Boots becomes a hero when he sets off on an adventure with the tough and street smart Kitty Softpaws and the mastermind Humpty Dumpty to save his town. This is the true story of The Cat, The Myth, The Legend... The Boots. -- (C) Dreamworks/Paramount

News & Interviews for Puss in Boots

Cats vs Dogs: Who Have The Best Movies?
RT on DVD & Blu-Ray: Puss in Boots and J. Edgar
Box Office Guru Wrapup: Puss in Boots Beats New Comedies for #1 Spot

View All Puss in Boots News

Critic Reviews for Puss in Boots

Puss in Boots kind of surprised me. Far more witty then I expected it to be, nicely animated and featuring a charming story of forgiveness and redemption that belies its Shrek inspired fractured fairy tale roots, this movie more than won me over.

What kids will get from it is plenty of fairly outrageous but not often witty fun with fairytale elements blended into a kind of latterday spaghetti western. For the rest of us, there is plenty of nice visual detail.

It's all amiable stuff, with a perfectly decent script, and the feline hero lapping his milk gets an indulgent laugh.

Puss in Boots is very jolly for an hour. Then, like Santa Claus misjudging a chimney, it gets stuck at the moment we hope it will break free and distribute the festive gifts.

this western-parodying cat-with-too-many-names is closer to Rango than to anything from the Kingdom of Far Far Away.

Surprisingly, it's one of the animated highlights of 2011.

As an origin tale, it is a sharp and sophisticated piece of storytelling.

It was fun, action packed and the animation was well-put together - a charming flick.

Puss In Boots- The Cat. The Myth. The Legend. The Boots. Purr-fectly Meowtastic!

Who else but Salma and Antonio could make cartoon cats so sexy together?

Audience Reviews for Puss in Boots

Well, all I can say is well. Not in a bad or a good way, but a eh, way. This movie overall was just average, it had things I liked about it, but its definitely not the best film I've seen this year, even not the best animated film, its just average. Antonio Banderas returns as the character from the fairy tale and from the Shrek series, and he does his fine job as usual, but there are four new characters introduced. Humpty Dumpty, played by Zach Galifinakis (Hangover, Due Date,) Kitty Softpaws, played by Salma Hayek (Frida,) and the two crooks Jack and Jill, played by Billy Bob Thornton and Amy Sedaris. I liked Salma as Kitty, she does a very good job at pulling off her emotions with this character, and how she reacts to puss, and Zach was just okay as Humpty, but Billy Bob and Amy didn't really do it for me. The main problem I have with this film is that its to predictable, it has so many things that we've already seen in other animated movies, and I could practically tell what was going to happen the whole film, which rarely through a loop at me. The humor is decent, the music is great, and the animation is still very good, but that doesn't help the films low entertainment value and some dumb characters. If you like animated films or have small kids, you might enjoy this film, but me I just thought it was an average animated film. My overall rating 3*s out of 5

It's enough to expand its Shrek universe and embrace its surprisingly charming side-character. Puss in Boots' solid CGI, star-studded voice cast and loveable charm hides the hairball of mishaps in plot that congested the film. 3.5/5

In reviewing Puss N Boots I'm going to forego all the weak cat or fairy tale puns (and gee, I just know you were waiting for some). What you have here is a spin off from the Shrek franchise (what's next, the Gingerbread Man Tales?), where the cat is the focus, front and center. A smart move, for, aside from Eddie Murphy's scatter gun humor as Donkey, the rest of the aforementioned franchise cannot hold a candle to Antonio Banderas' suave turn as Puss. The opening scenes are pure brilliance - high animation equaling the production values of Pixar - that the film cannot, and chooses not to maintain that level - shrug - what can I say? Regardless, those beginning scenes, with Banderas' lovely accented voiceover narration are worth the price of admission by itself. There are beautiful flights of humorous fancy on display, including homage to Sergio Leone and spaghetti western split screen. However, after that brilliant opening 15 minutes, the film cannot sustain it (think the 2nd half of "Up", or Wall-E for further examples). Overall the story is a bit cliché, reaching 3rd grade levels of a morality and redemption type tale... and, ya know, Humpty really started to get on my nerves (which I suppose was intended, but still!!!!). In typical Dreamwork/Shrek fashion, several fairy tales and fairy tale characters get a kick in the shorts, and actually that's part of the fun. Seeing Jack and Jill as a couple of gross thieves was a hoot, and their time on screen was about the only thing holding up the middle part of the film, which failed miserably in concocting anything magical during the scenes taking place in the Giant's castle (of Jack and The Beanstalk fame). Of course the script limited itself by first proclaiming that the Giant was dead, and secondly by failing to reveal the monsterous threat (deciding to keep that secret until later). When the monster finally makes an appearance, threatening to destroy the town of San Rodrigo, the towering, hulking figure made me think of Godzilla and my feeble brain started paraphrasing the lyric to Blue Oyster Cult's song Godzilla: "oh no, there goes Rodrigo" (see, there's a pun in here after all). I have failed to mention, that aside of the Humpty Dumpty/ Puss dynamic there is also some kitty love - as Salma Hayek voices Kitty Softpaws, who, to use the olden day western vernacular, is a thief with a heart of gold. The interplay between Hayek and Banderas works well, and really, overall this film is good fun. Brilliant? Not quite; held back a bit by the simplistic tale at its core, but certainly with enough good animation and truly funny moments to entertain young and old (I mean, who wouldn't laugh at the suave, posing Puss ordering a glass of milk and then, instead of drinking it, daintally laps it out of a shot glass with his tongue?).

Puss in Boots avoids all of the flaws of the last two Shrek movies, and revitalizes the universe in a shockingly good movie that is beautifully animated, hilariously mature, and stylish enough to make up for its spin-off nature.