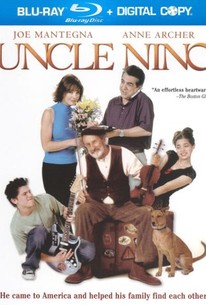 Critics Consensus: Critics say that despite a warm, well-meaning message about the importance of family ties, Uncle Nino is utterly corny and predictable.

Critics Consensus: Critics say that despite a warm, well-meaning message about the importance of family ties, Uncle Nino is utterly corny and predictable.

Critic Consensus: Critics say that despite a warm, well-meaning message about the importance of family ties, Uncle Nino is utterly corny and predictable.

A visit from a distant relative teaches a modern family about old-fashioned values in this family drama. Robert Micelli (Joe Mantegna) and his wife Marie (Anne Archer) are a couple living in Chicago with their two children, 15-year-old Bobby (Trevor Morgan) and 12-year-old Gina (Gina Mantegna). The Micelli Family is not as close as it once was; Robert is busy with work as he tries to earn a promotion, Marie has given up on cooking as a hobby, Bobby has started a rock & roll band with his friends and prefers to hang out with them, and Gina wants both a puppy and more attention from her dad. One day, Robert's elderly Uncle Nino (Pierrino Mascarino) arrives for a visit from Italy -- much to the surprise of the family, since Gina misplaced the letter Nino sent to announce his impending arrival. It doesn't take long for Nino to see that he's staying with an unhappy family, and he reaches out to them, reintroducing Marie to her love of good food, teaching Bobby about music, and teaching Gina about caring for pets and enjoying life; however, convincing Robert to spend more time with his family and less time worrying about work turns out to be a tough sell. Uncle Nino initially failed to find a distributor until the film's producers booked it into a theater in Grand Rapids, MI, where the film became a surprise hit playing to steady crowds for over a year.

Keegan-Michael Key
as Stranger at Airport

Shallcross fails to infuse the proceedings with the wit or distinctiveness necessary to lift it above the crop of its so many similar-themed predecessors.

Both movies have familiar and even hokey aspects, but they're also sincere rather than cynical, and there's something affecting about the very similar messages they're peddling.

Aggressive heartwarmer, which turns out to be much more of a heartburner.

An effortless heartwarmer that manages to be utterly corny but quite likable.

This is not my kind of movie, and I found myself feeling mighty restless by the end, or even halfway through, or even near the beginning, but objectively I know there are people who will embrace this movie.

As a film in general, Uncle Nino would probably be no more than a 6 out of 10, but as a family film it merits a 7.

The message is timeless. Family matters. Tell people you love them. Despite its predictability, the movie works because it is completely without guile.

Nino acts like an Italian fairy-god-uncle... transforming this house into a home - where flowers thrive, violin music fills the air, and everybody eats dinner together.

It feels something like a made-for-TV movie that fell back behind the fridge circa 1982 and has been rotting there ever since.

Such a hamfisted effort that the ostensibly comic moments aren't nearly as funny as the sappily earnest serious parts.

There's a place for a movie like this--but it's really on the Hallmark Hall of Fame rather than in an auditorium you have to pay to get into.

I think many families have that one member that, despite the fact that some of the members might not exactly get along, is beloved by everyone. No one can find a bad word to say about them. They're always there with sage advice, fix problems when you need them to and, overall, just do their best to help out. Note that I said many, not all, because there's are also many families that don't have that one member that's sort of a wise figure. My great-grandmother, at least before I was born, was that person in my family. I was close with her, but the family (which was fucking large) wasn't as close after I was born as opposed to when my mother and aunt where younger. Not to say that my great-grandmother was a saint, because she wasn't, but she was that figure. This film attempts to do some of that here, with the minor exception that they treat the titular Uncle Nino like a fucking saint. Granted, he has his dark past, which is only alluded to in one scene and never brought up again, he was arrested for doing something after falling in with the wrong crowd. If they said what he did, I honestly forgot. The point is that they acknowledge he's not a 'saint' in one scene and then they completely forget about it. Look, I'll be honest, this movie certainly means well. Its intentions are noble. I just found the way they went about telling their story to be completely counterproductive. Not to mention predictable as all fuck. It was predictable in 2003, when this was released (though it looks several years older than that due to its cinematography). So you can imagine how predictable and outdated it is FOURTEEN years after the fact. You've seen this movie before. An overworked and stressed husband, neglected wife, rebellious teen and young daughter all brought back together as a family by the grace, I'm going that far, of one special person who finds their way into their lives just at the moment they needed him most. Talk about saccharine, holy fuck. There's no actual, legitimate person like Uncle Nino in real life. I mean, there's certainly very nice people. People who try their damnedest to make a positive influence in the lives of their family and everyone they know. But the film makes Nino look like an adorable muppet. There's no depth to the character whatsoever. He's just there, like a fucking fairy godmother, fixing everyone's shit and bringing the family closer together. I'm not saying that the movie needed to be a realistic portrayal of an actual dysfunctional family, which this family is not, but I just wish the characters would have been a little more interesting than just the basic, one-dimensional characterization they're given for Nino to work his magic on. Robert and his son don't get along due to he hangs out with. Robert and his wife has problems due to Robert's dedication to his work. Robert ignores his daughter's plea for a dog. Robert hasn't talked to his sister in over a decade, or something like that. All of this is in place not because it actually tells an interesting story. It's there for Nino to fix with his old-world personality. Even with all of that, this movie could have, and really should have, been much worse than it was. The acting was perfectly solid. Joe Mantegna is a good actor and I do believe he deserves better than this, but he's just fine here. One thing though and, honestly, Mr. Mantegna feels completely out of place in this type of movie. I guess Armand Assante was busy or something. I don't know, they did need an Italian actor and Joe Mantegna is, reasonably, famous. He's no Pacino or anything, but he's a known actor. Still, his presence feels completely out of place here. Again, he's still fairly solid in his role, but I just don't picture him appearing in this type of sentimental family movie. But, he did appear in it and here we are. Everyone else is pretty good given the limitations of the characters. But the story really does drag everything down. It's just difficult to get into the characters when you've seen this type of story, done better, so many times. The comedy relies mostly on the culture clash Nino faces, having come all the way to America, from Italy, for the first time. This is a very sitcom-y or Hallmark Channel type movie. I don't think it's as bad as what you would see on Hallmark Channel, but you get what I mean. The acting may be solid, but the story is trite and predictable. Only watch this if you want a cheesy family the entire family can watch. They might not enjoy it, but it's nothing if not family-friendly.

Awe...what a nice, charming, cute, entertaining family movie! I really enjoyed the music at the end with Uncle Nino playing with the boys. Good job!