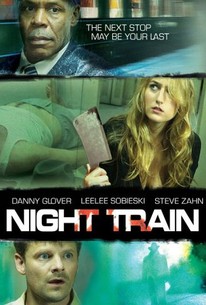 A train conductor (Danny Glover), a pre-med student (LeeleeSobieski), and a fast-talking salesman (Steve Zahn) find their greed clashing with their better judgment after stumbling into a fortune in diamonds aboard a speeding locomotive, and attempting to figure out a way to keep their discovery a secret. A nameless passenger has died en route to an unknown destination. His only possession: a mysterious box containing a valuable treasure. With that amount of money, the conductor, the student, and the salesman could all live comfortably for the rest of their days. But all three would rather have the fortune to themselves, and as the train races toward its destination, temptation, betrayal, deceit drives them each to irrational extremes in a paranoid bid to outsmart the others. Little do these three desperate souls realize that there's something sinister to this innocent looking box, and they might not find out what it is until it's already too late.

uses some common archetypes, like strangers on a train and the power of human greed, and in this sense it really feels like a feature-length version of a Twilight Zone episode

... King betrays his own objective to make a classical thriller and succumbs to the standard triteness of direct-to-DVD schlock.

I'm not exactly saying you shouldn't see Night Train, but afterward I was all... uh, bored.

An eerie noir commute with politically charged baggage on board, the film is visually haunting as both the train and ghoulish narrative weirdly accelerate into effectively surreal territory, taking the damaged planet with them as it hurls along.

"I really like Steve Zahn and Danny Glover. But this was not their best performances. Well no, more like not their best film cause their performances were solid. The movie tries to be mysterious, but it only ends up being confusing and pointless. The ending was crap too. I really enjoyed the first half, but by the middle it started losing its steam (pun inteded). Leelee impressed me by being really creepy in this movie. You never knew if she was being sincere or just waiting for her chance to strike her scythe (not literally, figuratively) down on you. It just wasn't what I was hoping it would be. Not worth seeing more than once."

The film quality was distractingly bad, and I almost turned it off. But the wife wanted more, so we watched. It got pretty interesting for the first half of the movie. Then suddenly, it was like a new movie started and everything went to hell very quickly. Let's just say it went from "this is kinda cool" to "what the hell is going on?" in just a few minutes. Not a terrible movie, but one you should only watch under the right mood.

Low-budget surreal thriller set on an overnight train. Three people dispute what to do when they find a body and a mystery box. It's like a tele-play lost Alfred Hitchcock Presents episode. The exterior train shots were done with minimalist CGI, which added to the fantasy. I watched this late at night, and ignored the jumps in storytelling logic, so it was a fun viewing.